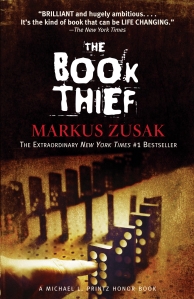 “The Book Thief” is a title you have probably heard of within the past few months. Markus Zusak’s 2005 novel won awards and critical acclaim when first published, and had a second wave of attention with the 2013 film adaptation last year.

I did not know what to expect when I first opened the 550 page book, but I was quickly engrossed in the tale of an ominous narrator who glances into periods of one Liesel Meminger’s life. Liesel is a nine-year-old girl living in Nazi Germany, 1939. She is abandoned by her mother after the death of her younger brother and is introduced to her new family – Mama and Papa. They are a strikingly realistic depiction of most long-lasting marriages, and Zusak handles the nuances of a child’s mind next to an adult’s masterfully. When Liesel and her family decide to hide Max, a young Jewish man and the son of Papa’s old wartime friend, Zusak treats us to what love can do to a broken spirit in the face of extreme consequences. Liesel coming to find trust in her adoptive parents is the thread that weaves the story together.

Most endearing, however, is Liesel’s begrudging friendship with her lemon-haired neighbour Rudy. Ruckus and sweet and unabashed, the relationship between the two of them is a beautiful reminder of what light can exist during the darkest of times.

What I found I most appreciated about the book, however, is its composition. The story is written in a style that redefines novel writing. Not only do you find the life of Liesel Meminger as interesting as the book’s narrator, but the physical book keeps you constantly refreshed as you read with different font styles and sequences of pictures that represent pages stolen from other books. Zusak is quite literally a “book thief” himself, much like young Liesel, whose love of books and vivacity for reading make her into the story’s heroine.

“The Book Thief” is a book that everyone should read, most especially if you have a love of books. The prose is fresh and invigorating, and the plot takes a new approach to one of the world’s darkest times in history. It is a moving reminder of the power of the mind and the strength that can be found in pure love.

Alexandra Sinclair Onski is an intern at the Thunder Bay Public Library.