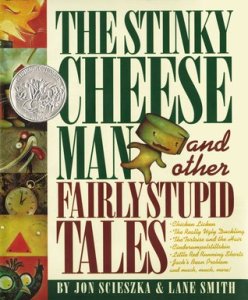 Working with children you read, re-read, and re-re-read stories all the time. Though we all have a favourite, even the best fairy tale (shout out to Strega Nona) can make you want to skip a few pages when you’ve read it too much. Enter stage right: fractured fairy tales – Hilarious renditions of classic tales that will have you rolling with laughter. The libraries have plenty of these but here are some of the ones I like the best.

Jon Scieszka is one of the kings of fractured fairy tales. Not only has he written one of the classics, The Stinky Cheese Man and Other Fairly Stupid Tales, but he’s also written The True Story of the Three Little Pigs and The Frog Prince, Continued. The Stinky Cheese Man has an all star cast of fairy tale characters from Clucky Lucky and Chicken Licken to the Ugly Duckling. In The Frog Prince, Continued (which is also one of the library’s puppet shows) the frog prince and his princess live together and now have to deal with typical relationship problems — she wants him to slay some dragons instead of lazing about catching flies and he just wants to stop being nagged! 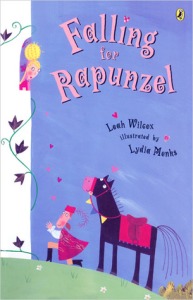 My personal favourites are written by Leah Wilcox. Falling For Rapunzel reimagines the princess mishearing her prince and throwing down everything but her hair including dirty socks! Her other story, Waking Beauty, begins with Prince Charming hearing a horrible dragon-like sound that turns out to be a snoring princess. Three fairies try to tell him he has to give her true love’s kiss, but he keeps interrupting them thinking he knows exactly what they’re telling him to do. I’m not sure why he thinks shooting a princess out of a cannon is what they intended!

Sleeping Cinderella and Other Princess Mix-Ups by Stephanie Clarkson features your four favourite princesses Snow White, Beauty, Sleeping Beauty and, of course, Cinderella. The four girls are tired of their current life styles and find themselves swapping lives with each other. Soon the princesses are facing the same problems of the princess they replaced and decide to return home. The four of them talk to the people in their lives and find ways to prevent the cycle from continuing.

If you’re looking for renditions of the Three Little Pigs, we have quite the selection. The Three Little Fish and the Big Bad Shark by Ken Geist reimagines the three little pigs as fish and the big bad wolf as a big bad shark. The shark tries again and again to get the fish but fish all agree: not by the scales on their finny-fin-fins. The Three Little Wolves and the Big Bad Pig is another retelling of the Three Little Pigs. Despite being the weaker animal, the pig uses increasingly ingenious technology to smash the wolves’ houses in. Another twist can be found in The Three Little Aliens and the Big Bad Robot by Margaret McNamara. When Gork, Bork, and Nklxwcyz are told it’s time to move out and find their own homes, the aliens search the galaxy for an appropriate planet. After choosing, they are each attacked by the BIG BAD ROBOT! Of course, the siblings end up at the eldest house which is the safest. Unlike the wolf, the big bad robot tries to climb down the chimney and shatters into useless space junk.

Nicole Koroscil – www.tbpl.ca. If you have a comment about today’s column, we would love to hear from you. Please comment below!