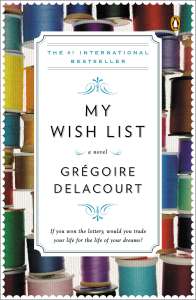 At the library recommendations on what to read come from both staff and patrons. Frequently they are variations on the theme of what is currently trendy, with only the occasional unexpected gem. “My Wish List” by Gregorie Delacourt, and translated into English by Anthea Bell, falls into the latter category. Reading the novel, which has been a bestseller across Europe, feels like sipping a glass of fine red wine. The plot acts like the top note, while it is the emotional depth of the main character that supplies the body.

Our protagonist is middle-aged Jocelyne, who lives in a small French town, running a mostly unsuccessful fabric shop. She is in the doldrums of her life: her marriage, while not unhappy, has lost any semblance of passion, and her grown children have moved away and distanced themselves. One of her few pleasures is writing a small knitting blog called “tengoldfingers”. Her life is destined to remain the same forever when on a whim she buys a lotto ticket and wins.

After Jocelyne wins, she tells no-one and squirrels away the cheque. She finds herself caught between the exciting potential for a new life for herself and her family, and the fear of leaving the comfort of her controlled, yet, cloistered life. As the days tick by, she goes between creating wish lists of the things the money can now buy and being frustrated by the fact that all the money in the world will not bring back her mother or reverse the dementia that is slowly claiming her father. While the novel itself is quite slim, and much of the language is sparse and almost poetic, the book is abundant in feeling as Jocelyne wins more than a lottery: she wins back her life.