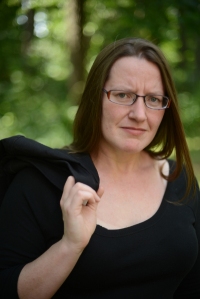 Elizabeth Bear is the author of many short stories and novels, including the Jenny Casey trilogy (Hammered, Scardown, and Worldwired), the Edda of Burdens (All the Windwracked Stars, By the Mountain Bound, and The Sea Thy Mistress), and the Eternal Sky trilogy (Range of Ghosts, Shattered Pillars, and Steles of the Sky).  She’s won many awards including two Hugos, the John W. Cambell Award for Best New Writer (2005), and a Locus Award for her Jenny Casey trilogy.  You can find her online at www.elizabethbear.com.

Shauna Kosoris: Your newest book, Karen Memory, just came out this month. What can you tell me about it?

Elizabeth Bear: Karen Memory is a steampunk thriller set in the American West, in the fictional Gold Rush town of Rapid City, which is loosely inspired by the cities of that era in the Pacific Northwest, notably Seattle and San Francisco. It involves derring-do, brave lawmen, high adventure, dirty politics, mind control, mecha fights, and a bordello full of women who are nobody’s fool and who aren’t about to take injustice lying down.

SK: That sounds like a lot of fun!  Do the women get to fight using the mechs?

EB: That’d be a spoiler.

SK: Then I guess I have to read it.  The main character, Karen Memery, is a queer woman. This isn’t the first time you’ve written about a queer character. What attracts you to their stories?

EB: I feel like the question itself is its own answer, really. It’s 2015; same-sex marriage is more or less legal in 36 states; and yet queerness is still a marked state. Gay, bisexual, asexual, poly, intersexed, and trans people deserve to be the heroes of stories as much as anybody else does, and it shouldn’t be any barrier to entry for anyone else to read them. People are people. If I can read a book by and about a straight white man and gain something from the experience, then it stands to reason that I can also gain something from the experience of reading a book by and about a black transwoman.

SK: That’s very true, and I’m sure many of your readers thank you for feeling that way.  Thinking of one of your poly-sexual characters, I’ve been reading (and loving!) your Edda of Burdens series lately. What inspired you to write it?

EB: I always find myself wanting to talk about the underdog, the outsider, the character whose worldview is erased. And in Norse mythology, that’s Loki’s monstrous children: Hel, Fenrir, Sleipnir, Jormungandr. They’re basically there to be the boogeyman, and kill everybody at the end of the world. And I wanted to tell a story based in the idea that Loki might just arrange for them to survive into the reborn world that appears in prophecies of a new earth arising after Ragnarok.

That’s all backstory, though!

Also, I had the character of Muire in my head, and it seemed fascinating to me to write about the experiences of a non-martial Valkyrie, somebody more interested in culture and science and history, who manages to be the sole survivor of the end of the world.

That, and a childhood addiction to 80s post-apocalyptic fantasy such as Thundarr the Barbarian and Krull. Ahem.

SK: I can see that connection.  Did the idea of the Technomancer come from the 80’s post-apocalyptic fantasy, too?

EB: She was carefully constructed to be a foil for the protagonist. Generally, when producing an antagonist, if they don’t just step out of my subconscious full-formed and rolling a cigarette, I design them to serve a bunch of narrative and structural purposes–driving the plot, reinforcing thematic elements, forcing character development in the protag, and so forth.

SK: I noticed some similarities between the second book of the series, By the Mountain Bound, and A Companion to Wolves, the first book you co-wrote with Sarah Monette. Was this intentional?

EB: Well, in the sense that they’re both based in Norse myth, and Norse myth involves a reasonable but possibly unhealthy obsession with wolves, it might have a lot to do with the source material!

SK: That’s fair.  Except for the series with Sarah Monette, you’ve written most of your books on your own. What’s it like, writing with a co-writer as opposed to writing something by yourself?

EB: In an ideal world, your co-writer writes all the bits you don’t feel like writing yourself!

The best situation is when the story turns into a sort of improv jam session, and everybody is having fabulous ideas and sparking off each other and throwing in cool bits to impress and amuse their friends. Sometimes it doesn’t work out that way, of course, but at the very least it’s nice to have someone go through and perform the function I refer to as “vacuuming commas,” which is basically fixing all the obnoxious fussy little things that get messed up when you’re writing, especially when you’re writing in a hurry to get stuff done.

SK: I read your Jenny Casey trilogy years ago and have always wondered: why did you center that story around the Canadian army, as opposed to the American army?

EB: The simple answer is because Jenny is Canadian! That was a character who very much was what she was: she came that way, and I didn’t much argue with her. (If you’ve read the books, I’m sure you appreciate that there’s no percentage at all in arguing with Jenny Casey.)

SK: That’s so true!  Do you often have characters show up in your mind like that?

EB: Some, yeah. Some, I have to go out and build from a kit. Or tease out of hiding. I’m very bad at consistency.

SK: You’ve written stories in many different genres (notably steampunk, science fiction, and fantasy). Do you have a favourite genre to write in?

EB: If I could manage it, my favorite genre to write in would be “Bestseller!”

Because of my reading habits growing up, I tend to see the branches of the speculative fiction tree largely as marketing categories, and I’m more or less a fan of them all. The tropes and trappings serve the same purpose as formalisms in poetry: they’re structures that give shape to a narrative. Also, they’re fun to play with. I don’t have a lot of favorite anythings, really—I like a very broad spectrum of literature, of music, and so on.

SK: Now that Karen Memory is out, what’s next?

EB: I am hard at work on two projects simultaneously.

The first is a new trilogy set in the same world as my Eternal Sky books. The first book is titled The Stone in the Skull. The protagonists are a mechanical man created as a servant by a wizard, and a fanatical warrior who was sworn to serve a religious overlord unquestioningly. Unfortunately for these two, their lieges are both long dead. So they team up. It’s one part odd couple road trip, one part epic political fantasy.

The second is called Ancestral Night, and it’s a big-idea space opera about a couple of salvage operators who stumble across an extremely valuable alien tech and have to keep ahead of all the factions who desperately want to get their hands on it.

SK: Those both sound exciting.  Finally, I have a few questions about what you read.  What book or author inspired you to write?

EB: Oh man. The book that makes me go, “I want to write something like that someday” is Peter Beagle’s The Last Unicorn. And by “like that,” I don’t necessarily mean a whimsical fantasy that hits like a truck, emotionally speaking. But something with that balance of light hand, humor, pathos, basic human truth, fun, and brilliant writing.

EB: …no, because I feel that “everyone” is a broad map, and people have very different tastes. I mean, this would be a great time for me to plug my boyfriend (Scott Lynch), or my writing partner (Sarah Monette/Katherine Addison), but I’m sure there are people who don’t read English, or who are so misguided they might not like their books.

Among newer and lesser known writers, however, I’ve been very much enjoying the work of Monica Byrne, Max Gladstone, Aliette de Bodard, and John Chu. Off the top of my head!

SK: I’ll have to check them out.  And what are you currently reading?

EB: I’ve spent the last two years doing most of my current genre reading for award juries, and my recreational reading, as a result, is almost all mysteries. However, on my immediate to-read pile is Get in Trouble by Kelly Link, The Just City by Jo Walton, Unbound by Jim C. Hines, The Galaxy Game by Karen Lord, and The Darkest Part of the Forest by Holly Black.