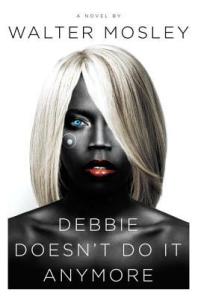 I’ve been trying out a few different authors lately, including Douglas Coupland. His latest novel, Worst. Person. Ever., contains a lot of smut and after the first few pages I thought “nahhhh….” and passed it on to the next person on the holds list. Walter Mosley’s latest novel, Debbie Doesn’t Do It Anymore, contains an awful lot of smut, venturing into straight out pornography. Despite this, it was a book that held me right to the end, with even a few tears shed along the way.

After an unusual day of shooting in which she experiences her first orgasm in over ten years, Debbie returns home and finds Theon dead in the hot-tub. His death, along with the orgasm, sparks an awakening in Debbie and she decides it’s time to get out of the industry and start over, claiming that she never really enjoyed it anyway. This is not to say that she regrets her past, or that she is in anyway ashamed of what she’s done. For her, being a porn star was a conscious choice: a job that paid the bills just like any other.

That’s the outside taken care of, but Debbie is on a journey to find herself, and that takes time. In so doing she has to deal with Theon’s huge debts and the heavies who are out to get their money back at any cost. She also has to reconcile herself to her estranged family and the son she had to give up into their care. Is suicide an option for Debbie? She believes so. As she struggles to work things out we learn that Debbie is probably the nicest person you could ever hope to meet. Her way with people is so effortless, breathing fresh air into the lives of others with her no nonsense, up-front, calm way.

I will certainly be reading more of Walter Mosley’s books. Debbie Doesn’t Do It Anymore has me hooked.