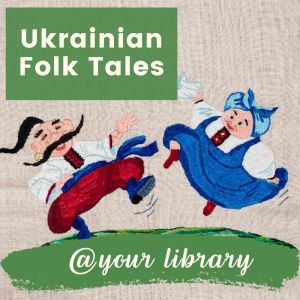 My household celebrates Ukrainian Christmas with many of the traditional twelve dishes on Ukrainian Christmas Eve, including meatless-borscht, perogies, and kutia (yum!) While planning what we’re going to make this year, I started wondering about other Ukrainian traditions. My love of books inevitably turned me to the Thunder Bay Public Library, searching for Ukrainian folklore. 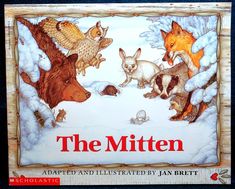 One well-known story is The Mitten, (alternatively The Glove). In this tale, a young boy loses his mitten in the snow, and various animals from the forest all jump into it to stay warm. The Thunder Bay Public Library has a couple of versions of the story, including one from 1964 by Alvin Tresselt, illustrated by Yaroslava, and a newer one from 1989 adapted and illustrated by Jan Brett. The older version has delightful artwork, alternating from colour to black and white; all the animals in this version wear traditional Ukrainian clothing, which was very fun to see. While the version by Brett has the animals just in their traditional fur coats, the artwork is absolutely gorgeous and really adds to the story. I found it really interesting that the animals in this version don’t speak the way they do in Tresselt’s text; this newer version also reads more like a modern story, while Tresselt’s reminds me more of a fable or folktale. 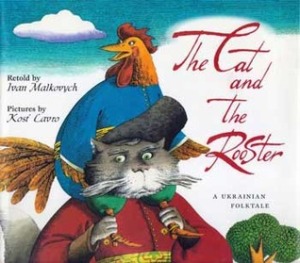 Yaroslava also created the delightful Tusya and the Pot of Gold, which tells the story of a poor farmer who finds a pot of gold while ploughing the fields. He knows that his wife will tell everyone, so he comes up with an elaborate plan to help them keep the gold when she inevitably lets the secret slip. I remember reading this book when I was younger, but I didn’t really appreciate it; rereading it now, it’s absolutely hilarious!  Yaroslava’s art really suits the story as well; she used a technique called reverse glass painting, where you start with the finer details in the foreground of the image, and slowly add more paint until you eventually paint the background. If you’d like to learn more about reverse glass painting, pages 54-55 of Glass Painting for the First Time by Dorris Sorensen walks you through how to achieve the technique.

I loved The Cat and The Rooster, a Ukrainian folktale that was retold by Ivan Malkovych. This is the story of a cat and rooster living together; the cat always goes out hunting, and tells the rooster not to open the door to anyone while he’s gone. The rooster inevitably doesn’t listen, so the cat has to go save him!  I love Kost Lavro’s art in this book too – like Yaroslava in The Mitten, the characters are all wearing different Ukrainian outfits. 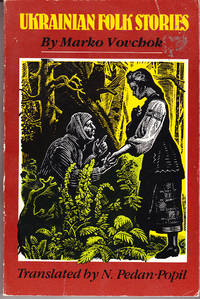 While the books I’ve mentioned so far are all picture books, I also found some short stories and fables for adults. One interesting collection is Ukrainian Folk Stories by Marko Vovchok, translated by N. Pedan-Popil, which tells of family life, and particularly about life among the serfs, in Ukraine during the mid 1800’s. Fair warning though: most of these stories are depressing; Pedan-Popil chose not to translate Vovchenko’s stories for children and other fables, which I imagine would have been more light-hearted.

Vovchok’s stories reminded me of The Collected Tales by Nikolai Gogol. While he wrote in Russian (and is generally classified as a Russian writer), Gogol was born in Ukraine, and many of his tales are set in Ukraine. Gogol’s tales are longer and more fantastical than Vovchok’s, and do not deal with serfdom (hence why they’re more fun).

You can place a hold on any of these books online through search.tbpl.ca, or by phoning 345-TBPL (8275). You can also find The Collected Tales, along with a few other stories by Gogol, on cloudLibrary.

Shauna Kosoris – http://www.tbpl.ca. If you have a comment about today’s column, we would love to hear from you.