Nicole and special guest Shauna are talking Massey Lectures this week. Have you read or listened to any of these fascinating talks before? Recommend a title to us, and watch this episode on YouTube! 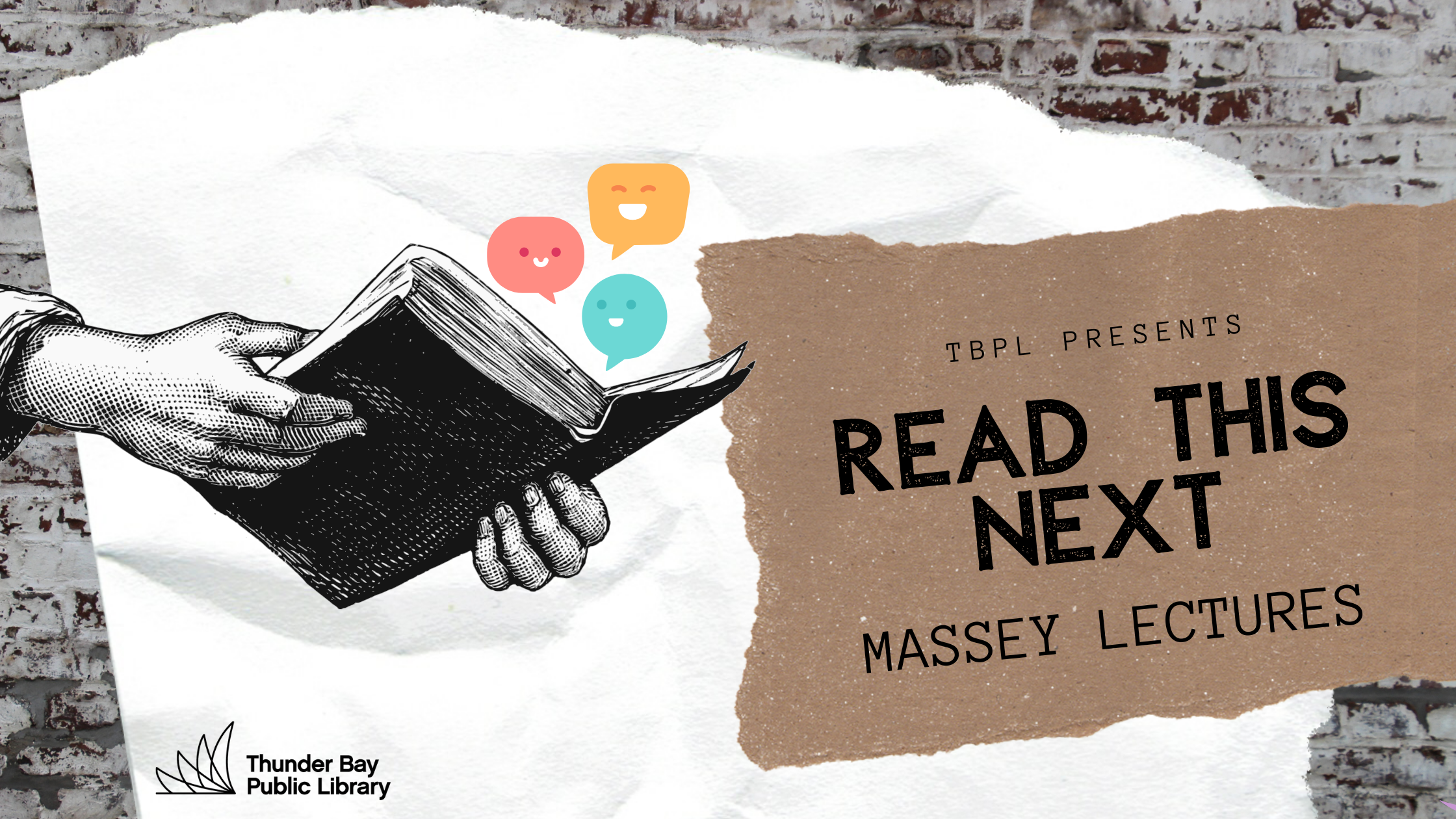 All Our Relations: Finding the Path Forward by Tanya Talaga

In this vital and incisive work, bestselling and award-winning author Tanya Talaga explores the alarming rise of youth suicide in Indigenous communities in Canada and beyond. From Northern Ontario to Nunavut, Norway, Brazil, Australia, and the United States, the Indigenous experience in colonized nations is startlingly similar and deeply disturbing. It is an experience marked by the violent separation of Peoples from the land, the separation of families, and the separation of individuals from traditional ways of life — all of which has culminated in a spiritual separation that has had an enduring impact on generations of Indigenous children. As a result of this colonial legacy, too many communities today lack access to the basic determinants of health — income, employment, education, a safe environment, health services — leading to a mental health and youth suicide crisis on a global scale. But, Talaga reminds us, First Peoples also share a history of resistance, resilience, and civil rights activism, from the Occupation of Alcatraz led by the Indians of All Tribes, to the Northern Ontario Stirland Lake Quiet Riot, to the Standing Rock protests against the Dakota Access Pipeline, which united Indigenous Nations from across Turtle Island in solidarity.

Based on her Atkinson Fellowship in Public Policy series, All Our Relations is a powerful call for action, justice, and a better, more equitable world for all Indigenous Peoples.

Payback: Debt and the Shadow Side of Wealth by Margaret Atwood

Legendary novelist, poet, and essayist Margaret Atwood delivers a surprising look at the topic of debt.

In her wide-ranging, entertaining, and imaginative approach to the subject, Atwood proposes that debt is like air — something we take for granted until things go wrong. And then, while gasping for breath, we become very interested in it.

Payback is not about practical debt management or high finance. Rather, it is an investigation into the idea of debt as an ancient and central motif in religion, literature, and the structure of human societies.

Margaret Atwood writes, “These are not lectures about how to get out of debt; rather, they’re about the debtor/creditor twinship in the broadest sense — from human sacrifice to pawnshops to revenge. In this light, what we owe and how we pay is a feature of all human societies, and profoundly shapes our shared values and our cultures.”

The CBC Massey Lectures, an annual broadcasting fixture for more than 45 years and Canada’s preeminent public lecture series, featured some of the finest talks by some of the greatest minds of modern times. In this extraordinary collection, major thinkers offer passionate polemics on the major issues of the 20th century. Here are King on race and prejudice; Galbraith on economics and poverty; Jacobs on Canadian cities and Quebec separatism; Goodman on the moral ambiguity of America; Brandt on international peace; Kierans on globalism and the nation-state; and much more. Their words not only have considerable historical significance but also remain hugely relevant to the problems we face today. At last, a selection of these “lost” lectures is available to a world so hungry for, and yet in such short supply of, innovative ideas. The Lost Massey Lectures includes an introduction by veteran CBC producer Bernie Lucht. 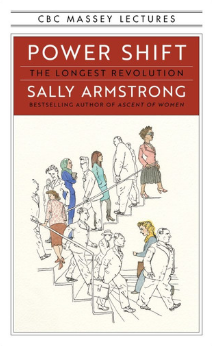 The facts are indisputable. When women get even a bit of education, the whole of society improves. When they get a bit of healthcare, everyone lives longer. In many ways, it has never been a better time to be a woman: a fundamental shift has been occurring. Yet from Toronto to Timbuktu the promise of equality still eludes half the world’s population.

In her 2019 CBC Massey Lectures, award-winning author, journalist, and human rights activist Sally Armstrong illustrates how the status of the female half of humanity is crucial to our collective surviving and thriving. Drawing on anthropology, social science, literature, politics, and economics, she examines the many beginnings of the role of women in society, and the evolutionary revisions over millennia in the realms of sex, religion, custom, culture, politics, and economics. What ultimately comes to light is that gender inequality comes at too high a cost to us all.

The Cult of Efficiency by Janice Gross Stein

We live in an age dominated by the cult of efficiency. Efficiency in the raging debate about public goods is often used as a code word to advance political agendas. When it is used correctly, efficiency is important: it must always be part of the conversation when resources are scarce and citizens and governments have important choices to make among competing priorities.

Even when the language of efficiency is used carefully, that language alone is not enough. Unilingualism will not do. We need to go beyond the cult of efficiency to talk about accountability. Much of the democratic debate of the next decade will turn on how accountability becomes part of our public conversation and whether it is imposed or negotiated.

Janice Gross Stein draws on public education and universal health care, locally and globally, as flashpoints in the debate about their efficiency. She argues that what will define the quality of education from Ontario to India and the quality of health care from China to Alberta is whether citizens and governments can negotiate new standards of accountability. The cult of efficiency will not take us far enough.

A Short History of Progress by Ronald Wright

Each time history repeats itself, the cost goes up. The twentieth century—a time of unprecedented progress—has produced a tremendous strain on the very elements that comprise life itself: This raises the key question of the twenty-first century: How much longer can this go on? With wit and erudition, Ronald Wright lays out a-convincing case that history has always provided an answer, whether we care to notice or not. From Neanderthal man to the Sumerians to the Roman Empire, A Short History of Progress dissects the cyclical nature of humanity’s development and demise, the 10,000-year old experiment that we’ve unleashed but have yet to control. It is Wright’s contention that only by understanding and ultimately breaking from the patterns of progress and disaster that humanity has repeated around the world since the Stone Age can we avoid the onset of a new Dark Age. Wright illustrates how various cultures throughout history have literally manufactured their own end by producing an overabundance of innovation and stripping bare the very elements that allowed them to initially advance. Wright’s book is brilliant; a fascinating rumination on the hubris at the heart of human development and the pitfalls we still may have time to avoid. 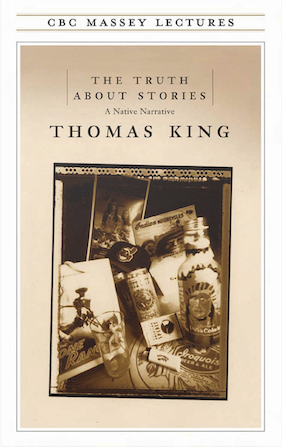 The Truth About Stories: a Native Narrative by Thomas King

In his 2003 Massey lecture, award-winning author and scholar Thomas King looks at the breadth and depth of Native experience and imagination.

Beginning with Native oral stories, King weaves his way through literature and history, religion and politics, popular culture and social protest, in an effort to make sense of North America’s relationship with its Aboriginal peoples.

Thomas King holds a PhD in English/American Studies from the University of Utah and has taught Native Studies at Utah, California, Minnesota, and Alberta for the past twenty-five years. He is currently Professor of English (teaching Native Literature and Creative Writing) at the University of Guelph. His widely-acclaimed novels include Medicine River, Green Grass, Running Water, and Truth and Bright Water, and he has been nominated for the Governor General’s Award as well as the Commonwealth Writer’s Prize. He is the editor of All My Relations: An Anthology of Contemporary Canadian Native Fiction, and co-editor of The Native in Literature: Canadian and Comparative Perspectives. His popular CBC series, The Dead Dog Café, is being adapted as an animated television series. His father was Cherokee, his mother is Greek, and King is the first Massey lecturer of Native descent.