It’s time for Among Us readalikes! This week, Nicole and Laura suggest titles full of lies, spies, and people in disguise. Not sure what Among Us even is? Join us anyway and get some great thriller suggestions. Watch the episode on YouTube!

Three Truths and a Lie by Brent Hartinger

A weekend retreat in the woods and an innocent game of three truths and a lie go horribly wrong in this high-octane psychological thriller filled with romantic suspense by Lambda Award–winning author Brent Hartinger.

Deep in the forest, four friends gather for a weekend of fun.

Truth #1: Rob is thrilled about the weekend trip. It’s the perfect time for him to break out of his shell…to be the person he really, really wants to be.

Truth #2: Liam, Rob’s boyfriend, is nothing short of perfect. He’s everything Rob could have wanted. They’re perfect together. Perfect.

Truth #3: Mia has been Liam’s best friend for years…long before Rob came along. They get each other in a way Rob could never, will never, understand.

Truth #4: Galen, Mia’s boyfriend, is sweet, handsome, and incredibly charming. He’s the definition of a Golden Boy…even with the secrets up his sleeve.

One of these truths is a lie…and not everyone will live to find out which one it is.

Nocturna (A Forgery of Magic #1) by Maya Motayne

Set in a Latinx-inspired world, a face-changing thief and a risk-taking prince must team up to defeat a powerful evil they accidentally unleashed.

To Finn Voy, magic is two things: a knife to hold under the chin of anyone who crosses her…and a disguise she shrugs on as easily as others pull on cloaks.

As a talented faceshifter, it’s been years since Finn has seen her own face, and that’s exactly how she likes it. But when Finn gets caught by a powerful mobster, she’s forced into an impossible mission: steal a legendary treasure from Castallan’s royal palace or be stripped of her magic forever.

After the murder of his older brother, Prince Alfehr is first in line for the Castallan throne. But Alfie can’t help but feel that he will never live up to his brother’s legacy. Riddled with grief, Alfie is obsessed with finding a way to bring his brother back, even if it means dabbling in forbidden magic.

But when Finn and Alfie’s fates collide, they accidentally unlock a terrible, ancient power—which, if not contained, will devour the world. And with Castallan’s fate in their hands, Alfie and Finn must race to vanquish what they have unleashed, even if it means facing the deepest darkness in their pasts.

Prince Anders, the ruler of Archenfield, has been murdered, leaving his younger brother, Jared, to ascend the throne. Sixteen-year-old Jared feels unprepared to rule the kingdom and its powerful and dangerous court, yet he knows he can rely on the twelve officers of the court to advise him. He also knows he can just as easily be at their mercy-especially when it appears that one of them may be responsible for his brother’s death. Unable to trust anyone, Jared takes it upon himself to hunt down his brother’s killer-but the killer may be hunting him, as well. Murder, betrayal, and intrigue abound in Justin Somper’s thrilling YA series debut. Exploring the political machinations of the medieval court and the lives that hang in the balance, Allies & Assassins is a gripping tale of a teen torn between duty and revenge.

We Hunt the Flame (Sands of Arawiya #1) by Hafsah Faizal

People lived because she killed.

People died because he lived.

Zafira is the Hunter, disguising herself as a man when she braves the cursed forest of the Arz to feed her people. Nasir is the Prince of Death, assassinating those foolish enough to defy his autocratic father, the king. If Zafira was exposed as a girl, all of her achievements would be rejected; if Nasir displayed his compassion, his father would punish him in the most brutal of ways.

Both are legends in the kingdom of Arawiya—but neither wants to be.

War is brewing, and the Arz sweeps closer with each passing day, engulfing the land in shadow. When Zafira embarks on a quest to uncover a lost artifact that can restore magic to her suffering world and stop the Arz, Nasir is sent by the king on a similar mission: retrieve the artifact and kill the Hunter. But an ancient evil stirs as their journey unfolds—and the prize they seek may pose a threat greater than either can imagine.

Set in a richly detailed world inspired by ancient Arabia, We Hunt the Flame is a gripping debut of discovery, conquering fear, and taking identity into your own hands.

The Love Interest by Cale Dietrich

A thrilling YA debut about teen spies disguised as “love interests”–whoever gets the girl lives; but the one she rejects, dies.

There is a secret organization that cultivates teenage spies. The agents are called Love Interests because getting close to people destined for great power means getting valuable secrets.

Caden is a Nice: The boy next door, sculpted to physical perfection.

Dylan is a Bad: The brooding, dark-souled guy, and dangerously handsome.

The girl they are competing for is important to the organization, and each boy will pursue her. Will she choose a Nice or the Bad?

Both Caden and Dylan are living in the outside world for the first time. They are well-trained and at the top of their games. They have to be – whoever the girl doesn’t choose will die.

What the boys don’t expect are feelings that are outside of their training. Feelings that could kill them both.

From debut author Cale Dietrich comes a fast-paced adventure that is full of both action and romance and subverts common tropes.

For the millions who log in every day, Warcross isn’t just a game—it’s a way of life. The obsession started ten years ago and its fan base now spans the globe, some eager to escape from reality and others hoping to make a profit. Struggling to make ends meet, teenage hacker Emika Chen works as a bounty hunter, tracking down players who bet on the game illegally. But the bounty hunting world is a competitive one, and survival has not been easy. Needing to make some quick cash, Emika takes a risk and hacks into the opening game of the international Warcross Championships—only to accidentally glitch herself into the action and become an overnight sensation.

Convinced she’s going to be arrested, Emika is shocked when instead she gets a call from the game’s creator, the elusive young billionaire Hideo Tanaka, with an irresistible offer. He needs a spy on the inside of this year’s tournament in order to uncover a security problem . . . and he wants Emika for the job. With no time to lose, Emika’s whisked off to Tokyo and thrust into a world of fame and fortune that she’s only dreamed of. But soon her investigation uncovers a sinister plot, with major consequences for the entire Warcross empire.

I’d Tell You I Love You, But Then I’d Have to Kill You (Gallagher Girls #1) by Ally Carter

Cammie Morgan is a student at the Gallagher Academy for Exceptional Young Women, a fairly typical all-girls school—that is, if every school taught advanced martial arts in PE and the latest in chemical warfare in science, and students received extra credit for breaking CIA codes in computer class. The Gallagher Academy might claim to be a school for geniuses, but it’s really a school for spies. Even though Cammie is fluent in fourteen languages and capable of killing a man in seven different ways, she has no idea what to do when she meets an ordinary boy who thinks she’s an ordinary girl. Sure, she can tap his phone, hack into his computer, or track him through town with the skill of a real “pavement artist”—but can she maneuver a relationship with someone who can never know the truth about her?

Cammie Morgan may be an elite spy-in-training, but in her sophomore year, she’s on her most dangerous mission—falling in love.

When Katarina Bishop was three, her parents took her on a trip to the Louvre…to case it. For her seventh birthday, Katarina and her Uncle Eddie traveled to Austria…to steal the crown jewels. When Kat turned fifteen, she planned a con of her own—scamming her way into the best boarding school in the country, determined to leave the family business behind. Unfortunately, leaving “the life” for a normal life proves harder than she’d expected.

Soon, Kat’s friend and former co-conspirator, Hale, appears out of nowhere to bring Kat back into the world she tried so hard to escape. But he has a good reason: a powerful mobster has been robbed of his priceless art collection and wants to retrieve it. Only a master thief could have pulled this job, and Kat’s father isn’t just on the suspect list, he is the list. Caught between Interpol and a far more deadly enemy, Kat’s dad needs her help.

For Kat, there is only one solution: track down the paintings and steal them back. So what if it’s a spectacularly impossible job? She’s got two weeks, a teenage crew, and hopefully just enough talent to pull off the biggest heist in her family’s history–and, with any luck, steal her life back along the way. 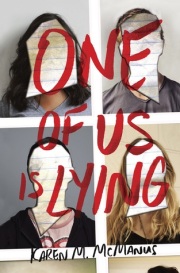 The Breakfast Club meets Pretty Little Liars, One of Us Is Lying is the story of what happens when five strangers walk into detention and only four walk out alive. Everyone is a suspect, and everyone has something to hide.

Bronwyn, the brain, is Yale-bound and never breaks a rule.

Addy, the beauty, is the picture-perfect homecoming princess.

Nate, the criminal, is already on probation for dealing.

Cooper, the athlete, is the all-star baseball pitcher.

And Simon, the outcast, is the creator of Bayview High’s notorious gossip app.

Only, Simon never makes it out of that classroom. Before the end of detention, Simon’s dead. And according to investigators, his death wasn’t an accident. On Monday, he died. But on Tuesday, he’d planned to post juicy reveals about all four of his high-profile classmates, which makes all four of them suspects in his murder. Or are they the perfect patsies for a killer who’s still on the loose?

Everyone has secrets, right? What really matters is how far you would go to protect them.

One thought on “Read This Next – Books for Among Us Fans”