You may have thought Westerns had ridden off into the sunset, so to speak, as a book genre. In fact, Westerns are still being written, but they are often remixed with other genres and tell stories about citizens of the wild west other than the same white male gunslinger. Watch the episode to hear Laura and Nicole share their suggestions and talk about the totally wild and not at all invented true history of potential hippo ranching in the US.

The Hunger by Alma Katsu

Tamsen Donner must be a witch. That is the only way to explain the series of misfortunes that have plagued the wagon train known as the Donner Party. Depleted rations, bitter quarrels, and the mysterious death of a little boy have driven the pioneers to the brink of madness. They cannot escape the feeling that someone–or something–is stalking them. Whether it was a curse from the beautiful Tamsen, the choice to follow a disastrous experimental route West, or just plain bad luck–the 90 men, women, and children of the Donner Party are at the brink of one of the deadliest and most disastrous western adventures in American history.

While the ill-fated group struggles to survive in the treacherous mountain conditions–searing heat that turns the sand into bubbling stew; snows that freeze the oxen where they stand–evil begins to grow around them, and within them. As members of the party begin to disappear, they must ask themselves “What if there is something waiting in the mountains? Something disturbing and diseased…and very hungry?”

Sunshield by Emily B Martin

The desolate canyons of Alcoro – and the people desperate enough to hide there – couldn’t be more different from the opulent glass palace and lush forests of Moquoia. But the harsh desert and gleaming court are linked through their past, present, and future: a history of abductions in the desert to power Moquoia’s quarries and factories, and a bleak, inhumane future built on the sweat and sacrifice of these bond laborers.

But events unfolding in the present could change everything. In the desert, outlaw Lark – known to most as the Sunshield Bandit – has built a name for herself attacking slavers’ wagons and freeing the captives inside. But while she shakes the foundation of Moquoia’s stratified society, she also has to fight to protect her rescuees – and herself – from the unforgiving world around them.

In the Moquoian court, young ambassador Veran hopes to finally make his mark by dismantling the unjust labor system, if he can navigate the strict hierarchy and inexplicable hostility of the prince.

And caught in the middle of it all, Tamsin is trapped within four walls, the epicenter of a secret political coup to overthrow the Moquoian monarchy and perpetuate the age-old system of injustice.

Separated by seas of trees and sand, the outlaw, the diplomat, and the prisoner are more connected than anyone realizes. Their personal fates might just tip the balance of power in the Eastern World – if that very power doesn’t destroy them first.

The future American Southwest is full of bandits, fascists, and queer librarian spies on horseback trying to do the right thing. 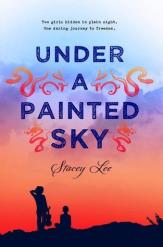 Under a Painted Sky by Stacey Lee

Missouri, 1849: Samantha dreams of moving back to New York to be a professional musician—not an easy thing if you’re a girl, and harder still if you’re Chinese. But a tragic accident dashes any hopes of fulfilling her dream, and instead, leaves her fearing for her life. With the help of a runaway slave named Annamae, Samantha flees town for the unknown frontier. But life on the Oregon Trail is unsafe for two girls, so they disguise themselves as Sammy and Andy, two boys headed for the California gold rush. Sammy and Andy forge a powerful bond as they each search for a link to their past, and struggle to avoid any unwanted attention. But when they cross paths with a band of cowboys, the light-hearted troupe turn out to be unexpected allies. With the law closing in on them and new setbacks coming each day, the girls quickly learn that there are not many places to hide on the open trail.

This beautifully written debut is an exciting adventure and heart-wrenching survival tale. But above all else, it’s a story about perseverance and trust that will restore your faith in the power of friendship.

“You ain’t gonna like what I have to tell you, but I’m gonna tell you anyway. See, my name is Karen Memery, like memory only spelt with an e, and I’m one of the girls what works in the Hôtel Mon Cherie on Amity Street. Hôtel has a little hat over the o like that. It’s French, so Beatrice tells me.”

Set in the late 19th century—when the city we now call Seattle Underground was the whole town (and still on the surface), when airships plied the trade routes, would-be gold miners were heading to the gold fields of Alaska, and steam-powered mechanicals stalked the waterfront, Karen is a young woman on her own, is making the best of her orphaned state by working in Madame Damnable’s high-quality bordello. Through Karen’s eyes we get to know the other girls in the house—a resourceful group—and the poor and the powerful of the town. Trouble erupts one night when a badly injured girl arrives at their door, begging sanctuary, followed by the man who holds her indenture, and who has a machine that can take over anyone’s mind and control their actions. And as if that wasn’t bad enough, the next night brings a body dumped in their rubbish heap—a streetwalker who has been brutally murdered.

Bear brings alive this Jack-the-Ripper yarn of the old west with a light touch in Karen’s own memorable voice, and a mesmerizing evocation of classic steam-powered science.

When her father is murdered for a journal revealing the location of a hidden gold mine, eighteen-year-old Kate Thompson disguises herself as a boy and takes to the gritty plains looking for answers—and justice. What she finds are untrustworthy strangers, endless dust and heat, and a surprising band of allies, among them a young Apache girl and a pair of stubborn brothers who refuse to quit riding in her shadow. But as Kate gets closer to the secrets about her family, a startling truth becomes clear: some men will stop at nothing to get their hands on gold, and Kate’s quest for revenge may prove fatal.

In this rollicking queer western adventure, acclaimed cartoonist Melanie Gillman (Stonewall Award Honor Book As the Crow Flies) puts readers in the saddle alongside Flor and Grace, a Latinx outlaw and a trans runaway, as they team up to thwart a Confederate plot in the New Mexico Territory. When Flor–also known as the notorious Ghost Hawk–robs the stagecoach that Grace has used to escape her Georgia home, the first thing on her mind is ransom. But when the two get to talking about Flor’s plan to crash a Confederate gala and steal some crucial documents, Grace convinces Flor to let her join the heist. 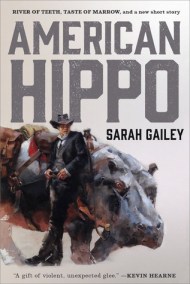 In 2017 Sarah Gailey made their debut with River of Teeth and Taste of Marrow, two action-packed novellas that introduced readers to an alternate America in which hippos rule the colossal swamp that was once the Mississippi River. Now readers have the chance to own both novellas in American Hippo, a single, beautiful volume.

Years ago, in an America that never was, the United States government introduced herds of hippos to the marshlands of Louisiana to be bred and slaughtered as an alternative meat source. This plan failed to take into account some key facts about hippos: they are savage, they are fast, and their jaws can snap a man in two.

By the 1890s, the vast bayou that was once America’s greatest waterway belongs to feral hippos, and Winslow Houndstooth has been contracted to take it back. To do so, he will gather a crew of the damnedest cons, outlaws, and assassins to ever ride a hippo. American Hippo is the story of their fortunes, their failures, and his revenge.

Click on the image below to read the long form non-fiction article that inspired Sarah Gailey:

In 1910, the United States—its population exploding, its frontier all but exhausted—was in the throes of a serious meat shortage. But a small and industrious group of thinkers stepped forward with an answer, a bold idea being endorsed by the likes of Theodore Roosevelt and The New York Times. Their plan: to import hippopotamuses to the swamps of Louisiana and convince Americans to eat them.

The only thing stranger than the hippo idea itself was the partnership promoting it. At its center were two hard-bitten spies: Frederick Russell Burnham, a superhumanly competent frontiersman, freelance adventurer, and fervent optimist about America’s future—Burnham would be the inspiration for both the Boy Scouts and Indiana Jones—and Fritz Duquesne, a.k.a. the Black Panther, a virtuoso con man and cynical saboteur who believed only in his own glorification and revenge. Burnham and Duquesne had very recently been sworn enemies under orders to assassinate each other. They’d soon be enemies again. But for one brief and shining moment they joined behind a common cause: transforming America into a nation of hippopotamus ranchers.

In American Hippopotamus, Jon Mooallem brings to life a historical saga too preposterous to be fiction—a bracing and eccentric epic of espionage and hippos, but also of a conflicted nation on the threshold of a bewildering new century, deciding what kind of country it would be, and what beasts it would eat.