Notes from the 26 June 2020 edition of Read This Next. Watch this and past episodes on the TBPL Facebook page or our YouTube channel.

THE MARROW THIEVES by Cherie Dimaline

In a futuristic world ravaged by global warming, people have lost the ability to dream, and the dreamlessness has led to widespread madness. The only people still able to dream are North America’s Indigenous people, and it is their marrow that holds the cure for the rest of the world. But getting the marrow, and dreams, means death for the unwilling donors. Driven to flight, a fifteen-year-old and his companions struggle for survival, attempt to reunite with loved ones and take refuge from the “recruiters” who seek them out to bring them to the marrow-stealing “factories.”

This teen novel, written by Iqaluit-based Inuit author Aviaq Johnston, is a coming-of-age story that follows a young shaman named Pitu as he learns to use his powers and ultimately finds himself lost in the world of the spirits. After a strange and violent blizzard leaves Pitu stranded on the sea ice, without his dog team or any weapons to defend himself, he soon realizes that he is no longer in the word that he once knew. The storm has carried him into the world of the spirits, a world populated with terrifying creatures—black wolves with red eyes, ravenous and constantly stalking him; water-dwelling creatures that want nothing more than to snatch him and pull him into the frigid ocean through an ice crack. As well as beings less frightening, but equally as incredible, such as a lone giant who can carry Pitu in the palm of her hand and keeps caribou and polar bears as pets. After stumbling upon a fellow shaman who has been trapped in the spirit world for many years, Pitu must master all of his shamanic powers to make his way back to the world of the living, to his family, and to the girl that he loves.

JONNY APPLESEED by Joshua Whitehead (an Oji-Cree storyteller from the Peguis First Nation in Manitoba)
“You’re gonna need a rock and a whole lotta medicine” is a mantra that Jonny Appleseed, a young Two-Spirit/Indigiqueer, repeats to himself in this vivid and utterly compelling novel. Off the reserve and trying to find ways to live and love in the big city, Jonny becomes a cybersex worker who fetishizes himself in order to make a living. Self-ordained as an NDN glitter princess, Jonny has one week before he must return to the “rez,” and his former life, to attend the funeral of his stepfather. The next seven days are like a fevered dream: stories of love, trauma, sex, kinship, ambition, and the heartbreaking recollection of his beloved kokum (grandmother). Jonny’s world is a series of breakages, appendages, and linkages–and as he goes through the motions of preparing to return home, he learns how to put together the pieces of his life. Jonny Appleseed is a unique, shattering vision of Indigenous life, full of grit, glitter, and dreams. 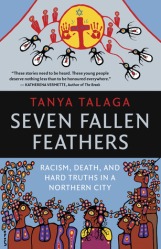 SEVEN FALLEN FEATHERS: RACISM, DEATH, AND HARD TRUTHS IN A NORTHERN CITY by Tanya Talaga
In 1966, twelve-year-old Chanie Wenjack froze to death on the railway tracks after running away from residential school. An inquest was called and four recommendations were made to prevent another tragedy. None of those recommendations were applied. More than a quarter of a century later, from 2000 to 2011, seven Indigenous high school students died in Thunder Bay, Ontario. The seven were hundreds of miles away from their families, forced to leave home and live in a foreign and unwelcoming city. Five were found dead in the rivers surrounding Lake Superior, below a sacred Indigenous site. Jordan Wabasse, a gentle boy and star hockey player, disappeared into the minus twenty degrees Celsius night. The body of celebrated artist Norval Morrisseau’s grandson, Kyle, was pulled from a river, as was Curran Strang’s. Robyn Harper died in her boarding-house hallway and Paul Panacheese inexplicably collapsed on his kitchen floor. Reggie Bushie’s death finally prompted an inquest, seven years after the discovery of Jethro Anderson, the first boy whose body was found in the water.

Using a sweeping narrative focusing on the lives of the students, award-winning investigative journalist Tanya Talaga delves into the history of this small northern city that has come to manifest Canada’s long struggle with human rights violations against Indigenous communities.

THE NIGHT WATCHMAN by Louise Erdrich

Based on the extraordinary life of National Book Award-winning author Louise Erdrich’s  grandfather who worked as a night watchman and carried the fight against Native dispossession from rural North Dakota all the way to Washington, D.C., this powerful novel explores themes of love and death with lightness and gravity and unfolds with the elegant prose, sly humor, and depth of feeling of a master craftsman.

Thomas Wazhashk is the night watchman at the jewel bearing plant, the first factory located near the Turtle Mountain Reservation in rural North Dakota. He is also a Chippewa Council member who is trying to understand the consequences of a new “emancipation” bill on its way to the floor of the United States Congress. It is 1953 and he and the other council members know the bill isn’t about freedom; Congress is fed up with Indians. The bill is a “termination” that threatens the rights of Native Americans to their land and their very identity. How can the government abandon treaties made in good faith with Native Americans “for as long as the grasses shall grow, and the rivers run”?
Since graduating high school, Pixie Paranteau has insisted that everyone call her Patrice. Unlike most of the girls on the reservation, Patrice, the class valedictorian, has no desire to wear herself down with a husband and kids. She makes jewel bearings at the plant, a job that barely pays her enough to support her mother and brother. Patrice’s shameful alcoholic father returns home sporadically to terrorize his wife and children and bully her for money. But Patrice needs every penny to follow her beloved older sister, Vera, who moved to the big city of Minneapolis. Vera may have disappeared; she hasn’t been in touch in months, and is rumored to have had a baby. Determined to find Vera and her child, Patrice makes a fateful trip to Minnesota that introduces her to unexpected forms of exploitation and violence, and endangers her life.
Thomas and Patrice live in this impoverished reservation community along with young Chippewa boxer Wood Mountain and his mother Juggie Blue, her niece and Patrice’s best friend Valentine, and Stack Barnes, the white high school math teacher and boxing coach who is hopelessly in love with Patrice.
In the Night Watchman, Louise Erdrich creates a fictional world populated with memorable characters who are forced to grapple with the worst and best impulses of human nature. Illuminating the loves and lives, the desires and ambitions of these characters with compassion, wit, and intelligence, The Night Watchman is a majestic work of fiction from this revered cultural treasure.

THE GHOST COLLECTOR by Allison Mills

Ghosts aren’t meant to stick around forever… Shelly and her grandmother catch ghosts. In their hair. Just like all the women in their family, they can see souls who haven’t transitioned yet; it’s their job to help the ghosts along their journey. When Shelly’s mom dies suddenly, Shelly’s relationship to ghosts—and death—changes. Instead of helping spirits move on, Shelly starts hoarding them. But no matter how many ghost cats, dogs, or people she hides in her room, Shelly can’t ignore the one ghost that’s missing. Why hasn’t her mom’s ghost come home yet? Rooted in a Cree worldview and inspired by stories about the author’s great-grandmother’s life, The Ghost Collector delves into questions of grief and loss, and introduces an exciting new voice in tween fiction.