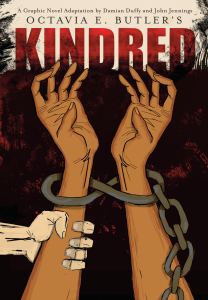 Octavia Butler’s novel Kindred was adapted by Damian Duffy and John Jennings into graphic novel format in 2017. Dana, an African-American woman in 1976, finds herself physically pulled into the year 1815. She saves the life of a white child, Rufus Weylin, and is quickly jolted back to 1976 when she is nearly shot by Rufus’ father. She is continually returned to the nineteenth century, sometimes with years in between – despite her only experiencing a few days in 1976 before being pulled back in time. Dana learns that Rufus is a relative – her great-great grandfather – and that his family is one which owns slaves. While she isn’t sure why she’s being pulled into the past, she has hopes that she can better the lives of the people who live on the Weylin plantation and hopefully influence Rufus’ life to make him a more compassionate person as he grows up – despite his impetuous nature.

The graphic adaptation is done in a style which emphasizes the disconnect between past and present – scenes in 1976 are done in a monochrome sepia, and even the 1800s era, while using a wider colour range, has an understated, dreamlike quality. Artist John Jennings does an excellent job with facial and body language –the expressiveness of the characters adds a layer of context to their dialogue. For fans of historical fiction and time-travelling science fiction, Kindred is a thought-provoking story about family, race, and their connections.

Max Brooks and Caanan White’s The Harlem Hellfighters is a semi-fictional account of the United States 369th Infantry Regiment, a little known African-American regiment which operated during the First World War. The story takes us from the recruitment of the soldiers all the way to the end of the war. Almost immediately the recruits are subjected to mistreatment by both civilians and other soldiers during their training at Spartanburg, South Carolina. From this point on the story makes it clear that their country, while willing to accept their service, sees them with disdain and is not willing to treat them on the same level as other soldiers. Their experiences in Europe show that even though they are heroic, it can be difficult for that fact to be acknowledged back home – and starts to cause some of the men to wonder why they’re fighting in the first place.

The art in this book is stark black and white, with no gray tones, and the linework is very crisp and clear cut. At times the lack of colour makes cluttered scenes hard to decipher, but the confusion and uncertainty this creates is very appropriate for images of battle. While not needlessly gory, Caanan White does not shy from illustrating the effects of the fighting on its participants, and this can be jarring at times. Brooks stated that the story of the Harlem Hellfighters is one that needed to be told. While he does fictionalize most of the characters, he does base them on real people and the unit did actually exist. This graphic novel is a fascinating portrait of black soldiers in the period not only of war, but during the nadir of race relations in the United States.

Other graphic novels available at the Thunder Bay Public Library with a Black History focus include: March by John Lewis, Andrew Aydin and Nate Powell;  Mandela and the General by John Carlin and Oriol Malet; and The Life of Frederick Douglass : A Graphic Narrative of a Slave’s Journey from Bondage to Freedom by Frederick Douglass and David Walker (coming soon).

Ryan Gracey – www.tbpl.ca. If you have a comment about today’s column, we would love to hear from you. Please comment below!