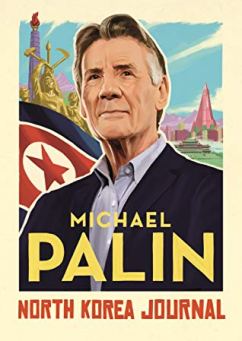 I went to the Democratic People’s Republic of Korea with my six year old son in 2000. We had a great time. The people were very friendly. We saw some interesting places and came to understand the Juche philosophy of self reliance which guides this workers state. Michael Palin made the same discoveries on his visit to the DPRK to make a TV documentary; he also kept a journal which was turned into this book, which is immensely readable and has some great photographs. Palin’s trip coincided with the thawing of relations between the west and DPRK and Michael’s relationship with his tour guides mirrored this, going from tense to relaxed. There are many humorous moments. A visit to a local school gives some insight when Michael tries to come out with a word or two of Korean and the students respond in clear English.  Palin takes a trip to the top of the Juche tower and looks down on the clean modern city of Pyongyang, which was completely destroyed in the Korean War. He also goes to the border with South Korea and visits a town on the east coast where a massive building project is under way covering 400 square kilometres. He flies to the DPRK’s highest point, Mount Paektu on the Chinese border, via one of the safest airlines on the planet. He drives through rural areas and notes the dearth of arable land, made worse by western sanctions. He celebrates May Day with the picnicking workers and marvels at the National Library – the Grand People’s Study House – which has pride of place on Kim Il Sung Square. He is sad to leave and immediately wants to go back. That is also how I felt about this beautiful, friendly, enigmatic country.