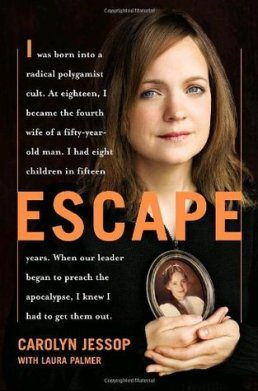 In the last 100 years, women’s lives have come a long way in the west. There is much greater choice in what we can wear, who we choose to marry, which faith we belong to, and access to information.

However, this is not the case for certain groups, including anyone born into the Fundamentalist Latter Days Saints (FLDS). This group is an extreme offshoot that practices polygamy, and who’s Prophets exert extreme control over the members. They reside in the two municipalities of Hilldale, Utah and Colorado City, Arizona as well as Bountiful, British Columbia. Carolyn Jessop was one member who lived in the twin municipalities, who was forced to be the fourth wife of a 50 year old man when she was 18 year old.

Although things were not perfect for Carolyn growing up (her mother has mental health issues which resulted in some abuse) the contrast between her home life growing up and Merril’s house was shocking. If anything went wrong, it was either one of the children or wives’ fault (with the exception of Barbara- the favourite). Are you ill? It’s because you’re not being obedient to your husband. Is Merril or Barbara being abusive? You’re doing something wrong. There were constant rivalries and backstabbing in Merril Jessop’s house. And the only little bit of pull a wife may have is if she has frequent intercourse with her husband. Essentially the whole dynamic of the polygamist marriage revolves around sex- even if it could kill you.

Carolyn ended up having 8 children with Merril, and always had difficult pregnancies. Her last birth almost killed her and resulted in her having a hysterectomy, which was the beginning of the end for her. That is, the end of her time in the FLDS-Eighteen months later, Carolyn made her escape from the cult with all of her children (including one who had special needs). This is how Escape begins, because it is, indeed, a new beginning.