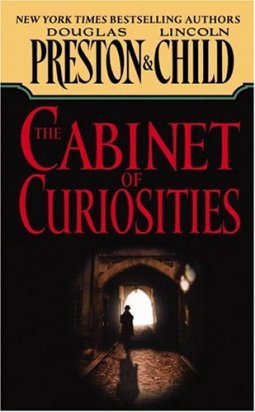 Normally when reading books in a series, one would start at the first book.  However, sometimes one has not a clue that the book is actually a part of a series and it works out for the better.  That’s exactly what happened when I first delved into the Agent Aloysius Pendergast series by Douglas Preston and Lincoln Child.  Their book ‘Cabinet of Curiosities’ is the third book in the series but the reader would never know and can treat the book as a standalone title.

During construction in Downtown Manhattan, a group of bodies are discovered that date back 130 years.  This draws the interest FBI Special Agent Aloysius XL Pendergast, who noted with the assistance of Dr. Nora Kelly, archaeologist at the New York Museum of Natural History, that all thirty-six murder victims had sections of the spine removed.  As Pendergast and Kelly conduct their investigation a new succession of murders begin with remarkable similarities to the recently uncovered crimes of the past.

It’s hard to pin point an actual genre for the book as it beautifully mixes mystery, supernatural and thriller/suspense elements.  I personally love the way they make use of and describe the New York Museum of Natural History, which is a key feature in numerous other Preston and Child novels.  The writing pair draw the reader in with the eccentric nature of Pendergast, the arrogant but lovable Bill Smithback and the courageous Nora Kelly.

As I stated earlier, this book is part of a series of titles involving Agent Pendergast.  While I don’t know if I would’ve continued the series if I started at the beginning with the title ‘Relic’ (which is still in itself a good book), everything about ‘Cabinet of Curiosities’ drew me in.  After reading Cabinet, I began reading every other book authored by the writing duo.  I think you will to. Sadly, we don’t have a copy of “Cabinet” but will happily order one on inter-library loan.

View all posts by derektbpl