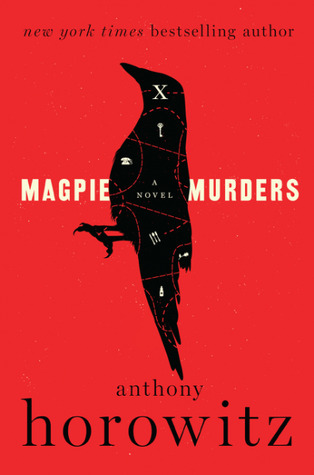 The famous phase “a riddle wrapped in a mystery inside an enigma” is a great way to describe the intricacies of the plot of Anthony Horowitz’s “The Magpie Murders”.  The book is in many ways a throwback to the Golden Age of Crime and will challenge even an experienced mystery reader.

The plot itself is a book within a book, and begins with Susan Ryeland , copy editor for Cloverleaf Books, sitting down to read the manuscript of Alan Conway’s latest novel, featuring his much acclaimed sleuth Atticus Pund.  The story switches into the actual manuscript about the murder of a very nosy cleaning woman and the beheading of a Lord in the sleeping English hamlet of Saxby on Avon. Susan soon discovers that there are three missing chapters in the manuscript and she begins to suspect that something   suspicious exists lies within the text of the book. Looking for the missing part of the book, Susan tries to contact the author only to discover that Alan Conway is dead, apparently having committed suicide.  The parallels between the unpublished manuscript and the mystery surrounding the author’s death turn Susan into an amateur detective wading through a series of cryptic clues, and placing her in mortal danger.

Horowitz is a talented author whose works include the only Sherlock Holmes novels authorized by the Sir Arthur Conan Doyle estate, “House of Silk” and “Moriarty”.  He has also stepped into the shoes of the late Ian Fleming, with the most recent James Bond title “Trigger Mortis”. He began writing with books for the young adult audience, including the hit “Alex Ryder” series, before branching out into adult novels and screenwriting  for the BBC.  His World War Two mystery series, “Foyle’s War” was a huge hit, running for eight seasons.