TBPL is working on its next five year Strategic Plan for the period 2019 – 2023. Previous plans have been produced by external consultants, but this time around we are doing it for ourselves. We are using a tried and tested method of community consultation – known as community conversations – which was developed in the United States by the Harwood Institute. It is based on a set of structured questions which explore community aspirations and concerns. At this stage we are not focusing on what kind of public library service that people want. We are more interested in “What kind of a community do you want?” “Why is that important?” And “How is that different from the way things are now?” When we are clear about people’s aspirations and concerns we can then determine how TBPL can respond to these community needs. In this way TBPL will become more community led and needs based. We cannot assume or second guess the needs of the community because we are not the experts in those needs – the community are the experts of their own needs.

It is becoming clear from the community conversations that we have held to date – and these have been with all types of demographic groups across all parts of the city – that there are some very consistent messages when it comes to community aspirations and concerns. Safety, for example, is top of mind for many people. When we dig a little deeper we find that safety is a pseudonym for a range of issues from racism to crime. Racism has emerged as a major issue in Thunder Bay. This is no surprise given the amount of media attention that has been given to this subject. Thunder Bay has appeared on the front page of Maclean’s Magazine with the headline of ‘the most racist city in Canada’. There was also a scathing article about racism in Thunder Bay, and the lack of response to it, published in the Walrus.  Seven Fallen Feathers by Tanya Talaga, which tells the story of seven young Indigenous people who died in Thunder Bay, continues to win literary awards and plaudits. It is also one of the most borrowed items from TBPL. 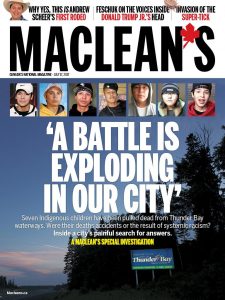 It is clear that Anti Racism, together with Decolonization, will be key strategic directions in TBPL’s next five year plan. Racism is based on power – who has it, and who doesn’t have it – and resources. TBPL will respond by sharing power and resources by forming partnerships and opening up library spaces to the whole community. TBPL will shadow the work of the Provincial Anti Racism Directorate by focusing on four key areas. Racism against the Indigenous community will be tackled via our Relationship Building and Reconciliation Strategy and Action Plan, which is being guided by our Indigenous Advisory Council. Some early outcomes of this plan are the partnership with Anishinabek Employment and Training Services at Waverley library and the Indigenous Knowledge Centres which will be developed at all four branch libraries.

The other three areas of racism we will be paying attention to are racism against visible minorities, Islamophobia, and anti Semitism. Thunder Bay is becoming an increasingly diverse city and TBPL will take a leadership role in ensuring that the needs of every community are identified, prioritized and met. We want to help build a strong, safe and inclusive community – but this will not be achieved without first acknowledging that racism exists and secondly by using an Anti Racism approach to mitigate systemic and institutional racism.

John Pateman  – www.tbpl.ca. If you have a comment about today’s column, we would love to hear from you. Check out the blog at tbplofftheshelf.com