If you love the juicy secrets, killer twists, and intense relationships in the community of Riverdale, pick up one of these suspenseful YA books featuring small towns with dark and deadly secrets. Click on the book title to place your TBPL hold!

Afterward by Jennifer Mathieu: When eleven-year-old Dylan Anderson is kidnapped, his subsequent rescue leads to the discovery of Ethan Jorgensen, who had disappeared four years earlier, and now Dylan’s sister Caroline befriends Ethan and wants to learn the truth about her autistic brother’s captivity.

Conversion by Katherine Howe: When girls start experiencing strange tics and other mysterious symptoms at Colleen’s high school, her small town of Danvers, Massachusetts, falls victim to rumors that lead to full-blown panic, and only Colleen connects their fate to the ill-fated Salem Village, where another group of girls suffered from a similarly bizarre epidemic three centuries ago.

Dead Girls Don’t Lie by Jennifer Shaw Wolf: Jaycee and Rachel were best friends until a terrible night when their friendship faltered and Rachel was found dead, but her last text message starts Jaycee on a search that may prove Rachel’s death was no random crime.

Evidence of Things Not Seen by Lindsey Lane:  When Tommy Smyth, a high school junior and particle physics genius, goes missing, multiple lives intersect–or don’t–as the residents of a small Texas town relate, in their separate voices, what each thinks might have happened to Tommy.

Far From You by Tess Sharpe: After Sophie Winters survives a brutal attack in which her best friend, Mina, is murdered, she sets out to find the killer. At the same time she must prove she is free of her past Oxy addiction and in no way to blame for Mina’s death.

Glimmer by Phoebe Kitanidis: Told in their separate voices, two teenagers wake up in bed together with total amnesia and must work together to try to recover their memories about themselves and the eerie Colorado town in which they find themselves.

Imaginary Girls by Nova Ren Suma: Two years after sixteen-year-old Chloe discovered classmate London’s dead body floating in a Hudson Valley reservoir, she returns home to be with her devoted older sister Ruby, a town favorite, and finds that London is alive and well, and that Ruby may somehow have brought her back to life and persuaded everyone that nothing is amiss.

Last Seen Leaving by Caleb Roehrig: Flynn’s girlfriend is missing, and people are suspecting him of knowing something, so he struggles to uncover her secrets as he must also face the truth about himself.

Missing by Kelley Armstrong: After a chance encounter with an injured boy, Winter Crane questions if all the teenagers who left her town did so voluntarily.

No One Else Can Have You by Kathleen Hale:  As sixteen-year-old Kippy of Friendship, Wisconsin, reads her best friend Ruth’s diary, she is shocked at what she learns and spurred to solve Ruth’s murder, certain that the boy who was arrested is innocent.

Please Don’t Tell by Laura Tims:  Having secretly killed the boy who violated her sister, Joy finds herself pursued by a calculating blackmailer who threatens to expose her unless she reveals scandalous secrets and meets other escalating demands.

Shine by Lauren Myracle: When her best guy friend falls victim to a vicious hate crime, sixteen-year-old Cat sets out to discover who in her small town did it. Richly atmospheric, this daring mystery mines the secrets of a tightly knit Southern community and examines the strength of will it takes to go against everyone you know in the name of justice. 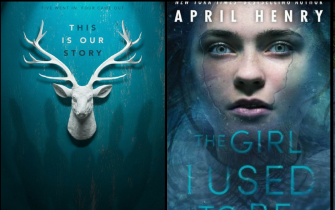 This Is Our Story by Ashley Elston: When a hunting accident claims a boy’s life, his best friends all come under suspicion.

The Girl I Used To Be by April Henry: When Olivia’s mother was killed, everyone suspected her father of murder. But his whereabouts remained a mystery. Fast forward fourteen years. New evidence now proves Olivia’s father was actually murdered on the same fateful day her mother died. That means there’s a killer still at large. It’s up to Olivia to uncover who that may be. But can she do that before the killer tracks her down first?

And of course, there’s the (new) comics!

Archie, vol 1: The New Riverdale by Mark Waid and Fiona Staples: America’s Favorite Teenager, Archie Andrews, is reborn in the pages of this must-have graphic novel collecting the first six issues of the comic book series that everyone is talking about. Meet Riverdale High teen Archie, his oddball, food-loving best friend Jughead, girl-next-door Betty and well-to-do snob Veronica Lodge as they embark on a modern reimagining of the beloved Archie world. It’s all here: the love triangle, friendship, humor, charm and lots of fun – but with a decidedly modern twist.

The Fever by Megan Abbott: The panic unleashed by a mysterious contagion threatens the bonds of family and community in a seemingly idyllic suburban community. The Nash family is close-knit. Tom is a popular teacher, father of two teens: Eli, a hockey star and girl magnet, and his sister Deenie, a diligent student. Their seeming stability, however, is thrown into chaos when Deenie’s best friend is struck by a terrifying, unexplained seizure in class. Rumors of a hazardous outbreak spread through the family, school and community. As hysteria and contagion swell, a series of tightly held secrets emerges, threatening to unravel friendships, families and the town’s fragile idea of security.

One thought on “Riverdale Readalikes”