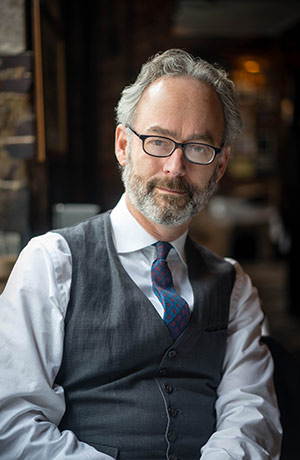 Amor Towles was born and raised in the Boston area. He graduated from Yale University and received an MA in English from Stanford University. An investment professional for more than twenty years, he now devotes himself full time to writing. His first novel, Rules of Civility, was a New York Times bestseller in both hardcover and paperback. Towles lives in Manhattan with his wife and two children. You can find him online at amortowles.com.

Shauna Kosoris: What inspired your newest novel, A Gentleman in Moscow?

Amor Towles: Over the two decades that I was in the investment business, I travelled a good deal for my firm. Every year, I would spend weeks at a time in the hotels of distant cities meeting with clients and prospects. In 2009, while arriving at my hotel in Geneva (for the eighth year in a row), I recognized some of the people lingering in the lobby from the year before. It was as if they had never left. Upstairs in my room, I began playing with the idea of a novel in which a man is stuck in a grand hotel. Thinking that he should be there by force, rather than by choice, my mind immediately leapt to Russia—where house arrest has existed since the time of the Tsars. In the next few days, I sketched out most of the key events of A Gentleman in Moscow; over the next few years, I built a detailed outline; then in 2013, I retired from my day job and began writing the book.

A Gentleman in Moscow seems rich in historic details, particularly concerning the Metropol Hotel. What sort of research did you do for the book?

Rather than pursuing research driven projects, I like to write from areas of existing fascination. Even as a young man, I was a fan of the 1920s and 1930s, eagerly reading the novels, watching the movies, and listening to the music of the era. I used this deep-seated familiarity as the foundation for inventing my version of 1938 New York in Rules of Civility. Similarly, I chose to write A Gentleman in Moscow because of my longstanding fascination with Russian literature, culture, and history. Most of the texture of the novel springs from the marriage of my imagination with that interest. For both novels, once I had finished the first draft, I did some applied research in order to fine tune details. In the case of A Gentleman in Moscow, I gathered firsthand accounts of life in the Metropol from an array of prominent people including John Steinbeck, E. E. Cummings, and Lillian Hellman. You can survey these accounts at amortowles.com.

Having researched all of these firsthand accounts, are any of the characters in the novel based on real people?

None of the novel’s central characters are based on historical figures, or on people that I have known. That said, I have pick-pocketed my own life for loose change to include in the book such as these three examples:

The thimble game that the Count plays with Sofia was from my childhood. My great grandmother was a Boston Brahmin who lived until she was a hundred in a stately house. When my cousins and I visited her (in our little blue blazers), she would welcome us into her sitting room. After the appropriate amount of polite conversation, she would inform us that she had hidden several thimbles in the room and that whoever found one would receive a dollar—prompting a good deal of scurrying about.

When I was a boy of ten, I threw a bottle with a note into the Atlantic Ocean near summer’s end. When we got home a few weeks later there was a letter waiting for me on New York Times stationery. It turned out that my bottle had been found by Harrison Salisbury, a managing editor of the Times and the creator of its Op-Ed page. He and I ended up corresponding for many years, and I eventually met him on my first visit to New York when I was seventeen. It so happens that Salisbury was the Moscow bureau chief for the Times from 1949 to 1954. A few colorful details in A Gentleman in Moscow spring from his memoirs; he also makes a cameo late in the novel, and it is his fedora and trench coat that the Count steals to mask his escape.

Finally, the scene in which the tempestuous Anna Urbanova refuses to pick up her clothes, throws them out the window into the street, and then sheepishly sneaks out in the middle of the night to retrieve them, was a scene that played out between my parents shortly after their marriage. Although, it was my mother who wouldn’t pick up her clothes, and my father who threw them out the window. I’ll leave it to you to guess who went out in the middle of the night to pick them back up.

What was the biggest challenge in writing the book?

Initially, I imagined that the central challenge posed by the book was that I was trapping myself, my hero, and my readers in a single building for thirty-two years. But my experience of writing the novel ended up being similar to that of the Count’s experience of house arrest: the hotel kept opening up in front of me to reveal more and more aspects of life.

In the end, a much greater challenge sprang from the novel’s geometry. Essentially, A Gentleman in Moscow takes the shape of a diamond on its side. From the moment the Count passes through the hotel’s revolving doors, the narrative begins opening steadily outward. Over the next two hundred pages detailed descriptions accumulate of people, rooms, objects, memories, and minor events, many of which seem almost incidental. But then, as the book shifts into its second half, the narrative begins to narrow and all of the disparate elements from the first half converge. Bit characters, passing remarks, incidental objects come swirling together and play essential roles in bringing the narrative to its sharply pointed conclusion.

When effective, a book like this can provide a lot of unexpected satisfactions to the reader. The problem is that the plethora of elements in the first half can bog readers down making them so frustrated or bored that they abandon the book. So, my challenge was to craft the story, the point of view, and the language in such a way that readers enjoy the first half and feel compelled to continue despite their uncertainty of where things are headed. Whether or not I succeeded in doing so is up to you.

Can you comment a little more on that diamond structure of A Gentleman in Moscow?

While odd, this accordion structure seems to suit the story well, as we get a very granular description of the early days of confinement; then we leap across time through eras defined by career, parenthood, and changes in the political landscape; and finally, we get a reversion to urgent granularity as we approach the denouement. As an aside, I think this is very true to life, in that we remember so many events of a single year in our early adulthood, but then suddenly remember an entire decade as a phase of our career or of our lives as parents.

That’s very true. Why did you decide to write A Gentleman in Moscow as your follow up to Rules of Civility?

Last year, Viking/Penguin contracted with me to publish my next two novels; now I just have to write them. I like to carefully design my books, beginning the writing process only once I have an extensive outline. I am still in the process of outlining my next book, but I suspect it will follow three eighteen-year-old boys on their way from the Midwest to New York City in the early 1950s…

I’d like to finish up with a couple of quick questions on what you read. What book or author inspired you to write?

I began writing when I began reading in first grade. Since then, the two practices have proceeded in parallel. Read, Write, Repeat. That said, probably my three favorite novels are Moby Dick, War & Peace, and 100 Years of Solitude.

For the last thirteen years, three friends and I have met monthly to discuss a novel over dinner. We generally work on projects over many months. Right now, we are in the process of reading 8 Philip Roth novels focused on those involving his alter ego, Zuckerman.