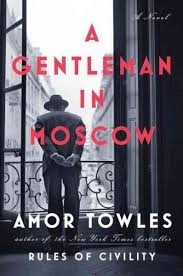 In the follow-up to his debut novel, Rules of Civility, author Amor Towles has written another fascinating and lyrical historical novel that captures the essence of a not so distant past.  This novel follows the story of Count Alexander Rostov , one of the last remaining members of the aristocracy left in Russia following the Revolution.  Rostov, a man of wit, charm and education who has never worked a day in his life is sentenced by a Bolshevik tribunal as being an unrepentant aristocrat and sentenced to house arrest at the Hotel Metropol, which sits across the street from the Kremlin.  Instead of a large palace or a luxury suite, he is stripped of his possessions and forced to live in a small attic room for over 30 years.

Rostov is not crushed by the change in his circumstances,  and instead develops close relationships with the staff and the regular guests at the hotel.  Against the backdrop of world events, Rostov observes the world and engages the interest and the friendship of a precocious nine-year-old named Nina.  As the years pass, it is Rostov’s charm and friendships that keep him safe from the purges that plague the outside world, despite a close relationship with the American ambassador Richard Wilshire.

Both of his novels are a joy to read, and the author’s love of language and wordplay is evident, as is his ability to illustrate overwhelmingly complicated situations with the use of quiet observation.  Rostov would be what my mother called a “charmer”, with the innate ability to understand human nature and gently manipulate situations to his advantage.  While the novel covers decades of fictional time, I was saddened to close the final page and look foward to any further works by Towles.

Lobby of the Hotel Metropol in Moscow, built in 1905.