Every year in the lead up to the holiday season, I always read a Christmas themed book or two; normally an easy romantic read and a mystery. This year’s romantic selection was “Christmas Eve at Friday Harbor” by Lisa Kleypas. Co-workers have been recommending other books by the author so when the book came across the desk as a return, I scooped it up as the cover was both simple and charming, without the cliched clinch of a happy couple or cartoony Christmas decorations meant to catch the eye. 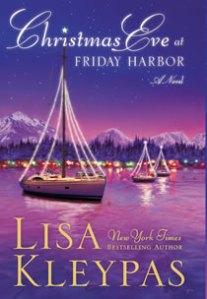 I found the book was as uncomplicated and pleasurable as the cover. Young widow Maggie Collins has moved to San Juan Island off the coast of Washington state to start a new life by running a toy store in the little tourist community of Friday Harbor. There she meets Mark Nolan who recently became guardian to his young niece Holly following the death of his sister, Victoria. Both are scarred by their pasts, Maggie doesn’t want to move on to a new relationship freeing the pain of loss again and Mark has always refused to commit himself emotionally due to the dysfunctional family environment who drifted into a comfortable but uninspired relationship that isn’t leading anywhere. Part of the catalyst in their coming together is Holly. Maggie instantly takes to the child and Mark finds himself opening up emotionally as he moves from Holly’s absentee uncle to her full time parent.

The writing style of the story is deceptively light and the dialogue sparkles. San Juan Island is well served by the book, for anyone who reads it will definitely want to visit, and I actually checked it out on a map and was surprised to find the Island and Friday Harbor are real places.  As the weather and the world darken, it’s time to take a moment and enjoy the simple pleasure of a cozy novel on a cold night.