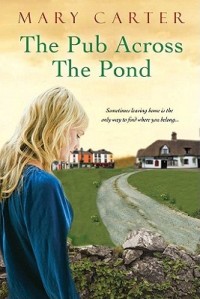 Having returned recently from a wonderful trip to Ireland, I really wanted to love this book. The plot is centered about an American woman from Ohio that wins a pub in Ireland. The pub is being raffled off to pay a gambling debt of Ronan, the son the the deceased former owner. The woman, Carlene Rivers, decides this is her chance at a new life and not surprisingly falls passionately in love with Ronan. Both Carlene and Ronan have secrets and baggage, which slows the inevitable coming together of the two.

Parts of the book were enjoyable especially the descriptions of the setting, the antics of the pub regulars and developing relationship between Carlene and Ronan. Carlene was a difficult character to identify with, for though she was good-natured and well meaning; she was frequently prone to the type of supposedly humourous antics that would be more at home in a 1950’s sitcom. There were a number of plot threads that were introduced including Carlene’s former Irish boxer husband and the mysterious woman who looked like a famine victim and seemed to be stalking Carlene that were either left unresolved or wrapped up neatly within a page or so.

If you are looking for an undemanding and light read with a mix of romance, travelog and humour, this might be the book for you. Just a word about the language, for a conventional or unconventional romance there is a lot of swearing, (which is very true to the Irish character) but it might offend some audiences. For a GoodReads review, I’d probably award the book a 3 out of 5.