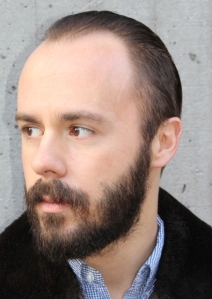 Andy McGuire is from Grand Bend, Ontario, and currently resides in Toronto.  He is pursuing an MFA in creative writing from the University of Guelph.  McGuire’s poems have appeared in Riddle Fence, Hazlitt and The Walrus.  He will present Country Club at the International Festival of Authors Lit on Tour event in Thunder Bay on November 1st.

Shauna Kosoris: What first drew you to poetry?

Andy McGuire: The money and fame. Actually, I really don’t remember. Whatever it was has become historical fact. My earliest attempts at writing poems coincided with a pretty dark time in my life. The main feature of that time was a super unhealthy disassociation with the world, and myself, that apparently was amenable to a poetic impulse. Maybe that was a poetic impulse, or my poetic impulse, who knows—all I have to go on is the memory of a feeling. It was the beginning of my love of language. The engine is a love of language, poetry is whatever that engine puts in motion. All I know is that for me, that engine only became available, or possible, at my absolute lowest.

If your absolute lowest was the beginning, what is driving you now?

This is a hard question because I spend most of my time writing, and thinking about writing. I only ever step back and consider things like what is driving me now when asked in an interview. The thing that drives my work, besides the supernatural Rube Goldberg machine that pulls the mysterious stops in turn, is a love of language. There you have it, the dull moment of truth. Also, I feel crippling guilt and anxiety if I go more than a few days without writing, without making something, anything, really. Yeah, that definitely drives me also. Guilt, anxiety, and shame. The three amigos in the heart of a classic buzzkill. Inside of any maker—someone who feels an imperative to create—something is a little broken, I think, in a good way.

What is your favourite poem form to write and why?

I don’t have a favourite poetic form. On the one hand, I try not to have too much tension in the reins while writing, and yet I find great value in introducing constraints to a poem in progress. A rhyme scheme, a repeated stanzaic structure; these sorts of formal elements usually reveal themselves during the compositional process. The filmmaker Errol Morris has a theory of art: establish an arbitrary set of rules and follow them. I love that. Even though I’m not very interested in writing sonnets and sestinas (at least at the moment), the reasons why some poets are interested make perfect sense to me. It’s the freedom of a limited repertoire. It makes things sayable. The art of encumbrance often leads to otherwise unavailable aesthetic possibilities. I am sympathetic to the formalist cause, I just find that it doesn’t square well with the eternal pursuit of good times. Several of the poems in Country Club flirt with a formal grandiosity and deploy all sorts of traditional techniques in weird ways. Lately I’ve been writing poems in the form of top ten lists. I have found the form to be incredibly versatile and deeply inclusive. I labour endlessly over these lists, but it’s fun, I get away with a lot. I can say things like This life owes me a death, and Love is an unmarked van, and Maybe cashmere just wants to be left alone, all in the same breath.

What made you start writing poems in the form of top 10 lists?

It happened by accident. I was reading an article about Afghanistan, and the supernatural Rube Goldberg machine pulled some mysterious linguistic stop and suggested the title, Top Ten Stans. So I made a top ten list of preeminent Stans that included Stan Cup, Paul Stan, Stan Park and Afghanistan. It was my first taste of the linguistic slippage that characterizes the lists. I was hooked.

Do you think you’d ever be interested in writing sonnets and sestinas in the future?

Absolutely, maybe, who knows. I may wake up wrecked on a formalist shore one cold New England morning. It wasn’t in the cards of all my old futures. Still, I carry around a little emergency kit with a bag of scotch mints and a list of words like chesterfield.

I mean the pursuit of pleasure, the diametric opposite of scotch mints and words like chesterfield.

Country Club  examines human passions, such as wealth, power, leisure, and desire.  Which passion did you find the most interesting to explore in poetry?

Several of the poems in Country Club are either about or set in Florida. The reason being that I wintered there one year while I was working on my manuscript. The human passions you mention are hard to parse in the Sunshine State. They kind of come as a package deal. That winter I was living in a private golf course community deep in the heart of retirement country. A few weeks ago Donald Trump held a campaign rally just down the road from where I was. That is where I spent the winter, American Thanksgiving, Christmas, and Valentine’s Day. The frozen sea within me melted. At that latitude, you would only need an axe when Florida freezes over. Anyway, the culture down there amounted to conspicuous excess, a kind of disengagement from the world. I wanted the Florida poems to reflect in some way the cultural attitudes and postures, the sheer idleness, that gave rise to their occasion. The Florida poems, in particular, were a pleasure to write.

So gluttony and sloth (in Florida)?

That’s a generous way of putting it, but yes.

You’re currently pursuing your MFA in creative writing at the University of Guelph. What’s the most interesting thing you’ve learned so far during your time there?

I just defended my thesis, which was a novel, this past summer. I had never attempted fiction before, and I learned that the process of novelistic composition involves way more typing than poetry. The Guelph program has a stellar faculty, and the instructors I worked with—Catherine Bush, Kevin Connolly, Dionne Brand and Michael Winter—helped me in various ways to become a better reader and editor of my own work. The Guelph program really encourages students to take risks in their writing. I bet the farm a few times. For me, that was one of the most valuable outcomes of the program: learning what kind of risks I want to take in my work, and developing my writerly instincts in that sense.

How successful were you during those times you bet the farm?

The point was to try things out, so my experimentations were successful, in that I found great value in taking risks (considered risks, of course) and simply trying out different modes of writing. Hence the novel. If we’re talking about publishing as a measure of success, well, my novel and I are on a break. I was like, It’s not me, it’s you. Sometimes you need to shelve a piece of writing to figure out what it is, what it needs to be.

Other than your MFA, what are you working on now?

I have been doubling down on my second book of poems. It’s going to be a collection of the aforementioned top ten lists. My novel is enjoying the inside of a drawer for the time being. I always have a gaggle of projects on the go—things I should wait to talk about until the second trimester.

Finally, I have a few questions about what you read.  What book, author, poem, or poet inspired you to write?

The authors that have been putting the flames in my fire lately are Adam Phillips and Sarah Manguso. Their sentences are special. Also currently in rotation: Alice Oswald’s Memorial, Emily Dickinson’s collected poems, Jenny Zhang’s Dear Jenny, We Are All Find, Arthur Waley’s translation of the Tao Tê Ching, James Tate’s Memoir of the Hawk, and the letters of Groucho Marx.

Those are all authors and poets who are currently inspiring your writing.  Did anyone or any poem first inspire you to write?

My old friend Graeme Charles read my earliest poems. They would come back to me creased and stained, covered in slashes and burns. He was ruthless, he really cared. He’s the smartest guy I know, and I haven’t seen him in years. Graeme, if you’re reading this, give me a sign, let’s get together.

Is there a book or poem that you think everyone should read?

On the contrary, I would advocate for veering off the beaten path. Read a book written by the trainer of a famous dog. Read The Warren Report. A book about a river, or the greatest art heist in history. An autobiography of a failed lion tamer. I once heard someone say, All reading is counterproductive—a truly stupid thing to say, but an interesting provocation nonetheless. I have gotten the best returns from my most seemingly counterproductive reading. That said, maybe everyone should read Country Club.

So what was the most seemingly counterproductive thing you’ve read?

I guess what I mean is that my reading habits are largely determined by chance. Books lead to other books, and I’ve developed a fairly decent instinct with regard to literary leads. Also, bibliographies, obscure blogs and remainder tables are my best friends. I have found that the most memorable books are the ones that are like portals to weird little alcoves within the world. For example, there’s a book called Letters to Strongheart by a man named J. Allen Boone. Strongheart was the first canine movie star, like, before Rin Tin Tin. He was famous for having apparently cried once in a close-up on film. A little dog tear running down his dog cheek. Anyway, after Strongheart died this J. Allen Boone started writing letters to Strongheart. And so the book is twenty-three letters to a dead dog. The kind of book you might find on a remainder table—my kind of book. That sort of obscure stuff really fills my tank. But also, it doesn’t have to be books. When you value writing as writing, any paragraph, any sentence or line can be as good as the next. Your mom can write a line in a text that sounds like it came from a crestfallen mermaid. Reading is reading, and in the course of a day I read all sorts of things that you probably wouldn’t think contribute or are relevant to artistic work, but there’s always some processing happening on some level. Who knows how these things work. They work, is all, and they’re always working, even when they’re not. I mean, a river doesn’t flip an on switch as soon as someone looks. 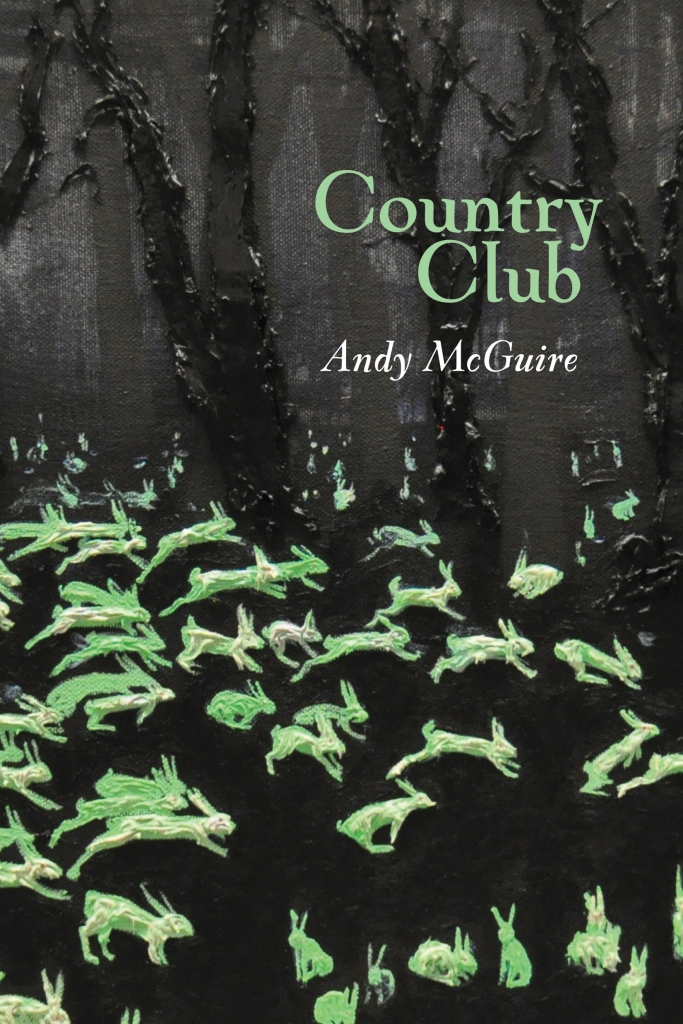