If I Fall, If I Die is the first novel by Michael Christie. Set in his hometown of Thunder Bay, If I Fall, If I Die follows the adventures of Will, the son of an agoraphobic mother. Will’s mom is terrified of leaving the house and Will considers himself her guardian, keeping her safe from what he calls the Black Lagoon (her debilitating depression brought on by her fear). But when he hears an unexpected noise in the yard, he braves the dangers he imagines there to be…and discovers that Outside isn’t as scary as he previously thought. He even meets another boy, Marcus, who agreed to be friends. And so Will starts venturing Outside more and more, especially once he realizes Marcus is missing; Will makes it his mission to find the other boy, even though no one else seems to care about “another runaway Native kid.” 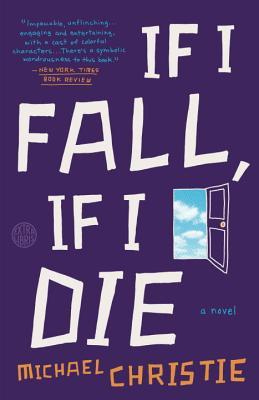 The first half of If I Fall, If I Die was amazing. Christie has beautiful prose, which is perfect for describing the wonderful world Will and his mother have built for themselves Inside. And even how Will started literally braving the Outside was so well done. But from about 100 pages in, the book changes focus, making what should have been a spectacular read merely okay in the end. That being said, it’s definitely still worth reading. If I Fall, IF I Die transitions from agoraphobia to dealing with racism in our city. Racism against Native Canadians in Thunder Bay is quite bad, so having the first boy Will meets Outside be a Native Canadian makes it unsurprising that the book deals with this racism in some fashion. I’m glad to see this discussion happening, and I hope Christie’s book will lead to more awareness of the issue our city faces.