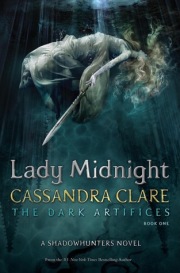 THE MORTAL INSTRUMENTS & THE INFERNAL DEVICES

BOOK 1 IN THE DARK ARTIFICES SERIES

The Shadowhunters of Los Angeles star in the first novel in Cassandra Clare’s newest series, The Dark Artifices, a sequel to the internationally bestselling Mortal Instruments series.

THE GREAT AMERICAN WHATEVER by TIM FEDERLE

Teenaged Quinn, an aspiring screenwriter, copes with his sister’s death while his best friend forces him back out into the world to face his reality. By the author of the middle grade novels Better Nate Than Ever and Five, Six, Seven, Nate!

ON THE EDGE OF GONE BY CORINE DUYVIS: In Amsterdam, the Netherlands, in 2034, a comet is due to hit Earth within the hour. Denise, who’s sixteen years old and autistic, must try to find her missing sister and also help her neglectful, undependable mother safely aboard a spaceship.

A TYRANNY OF PETTICOATS

From an impressive sisterhood of YA writers including Marissa Meyer, Marie Lu, and Beth Revis comes an edge-of-your-seat anthology of historical fiction and fantasy featuring a diverse array of daring heroines. Criss-cross America — on dogsleds and ships, stagecoaches and trains — from pirate ships off the coast of the Carolinas to the peace, love, and protests of 1960s Chicago. Join fifteen of today’s most talented writers of young adult literature on a thrill ride through history with American girls charting their own course.

KEEPER OF THE MIST by RACHEL NEUMEIER: Required by ancient magic to assume the dangerous position previously held by the father she barely knew, Keri relies on her three clever guides and struggles to outmaneuver her treacherous half-brothers while working to repair a failing boundary between her people and land-hungry neighbors

THE STEEP AND THORNY WAY by CAT WINTERS: A thrilling reimagining of Shakespeare’s Hamlet, The Steep and Thorny Way tells the story of a murder most foul and the mighty power of love and acceptance in a state gone terribly rotten – 1920s Oregon.

INTO THE DIM by JANET B TAYLOR: Sixteen-year-old Hope Walton travels back in time to help rescue her mother, a member of the secret society of time travelers, who is trapped in twelfth-century England in the age of Eleanor of Aquitaine. Addictive, romantic, and rich with historical detail, Into the Dim is Outlander for teens.

BURNING GLASS by KATHRYN PURDIE: Wishing to be free instead of serving as an Auraseer, or psychic warning guard, to an oppressive emperor, young empath Sonya struggles with her unwieldy powers while guarding a charming yet volatile new ruler and questioning her loyalties in the face of a growing rebellion.

A STUDY IN CHARLOTTE by BRITTANY CAVALLARO: Equal parts tender, thrilling, and hilarious, A Study in Charlotte is the first in a trilogy brimming with wit and edge-of-the-seat suspense. Sherlock Holmes’ and Dr. Watson’s descendants, Charlotte and Jamie, students at a Connecticut boarding school, team up to solve a murder mystery.

DAWN OF SPIES by ANDREW LANE: With an illustrious cast of historical characters including King Charles II and Sir Isaac Newton, Crusoe thrusts the reader and its young heroes into a world of espionage, intrigue, and peril at the dawn of the spy age.

REBEL OF THE SANDS by ALWYN HAMILTON: Amani is desperate to leave the dead-end town of Dustwalk, and she’s counting on her sharpshooting skills to help her escape. But after she meets Jin, the mysterious rebel running from the Sultan’s army, she unlocks the powerful truth about the desert nation of Miraji…and herself.

Map of Fates, book 2 the Conspiracy of Us series by Maggie Hall

The Winner’s Kiss, finale for the Winners trilogy by Marie Rutkoski

Walk the Edge, book 2 in the Thunder Road series by Katie McGarry

The Skylighter, book 2 in the Storyspinner series by Becky Wallace

A Tangle of Gold, finale for the Colours of Madeline series by Jaclyn Moraiarty

Sisters of Salt and Iron, book 2 in the Sisters of Blood and Spirit series by Kady Cross

NEW Booklists on the Blog

For more YA booklists and new releases, visit tbplteens.tumblr.com