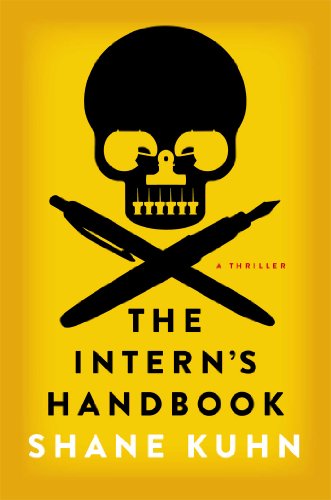 In preparation for reading “Hostile Takeover” the new book by Shane Kuhn, I decided to re-read his first novel ” The Intern’s Handbook”. On second reading, I still love the sly,dark humour, the clever plot and the well drawn and quirky characters.

The novel is the first in the series featuring John Lago, a cypher character who is a trained assassin, working undercover as an intern in order to insinuate himself in a position to kill his target.  The idea that an intern is in the perfect position to be an assassin is brilliant. In many large offices, the intern(normally an unpaid, overworked and ignored employee) can move from position to position,  with access to confidential files, company secrets or protected individuals, without anyone really noticing them.  John Lago, the child of the social service system with a dark past.  With the help of HR, Inc., which doubles as a placement agency but is really a cover for it’s murder for hire business and the a personality crafted from the movies, John has invented himself. He feels also outside of humanity and refers to himself as a monster, using movie quotes and situations to move within the conventions of society.

His latest and final assignment at the ripe old age of 25, will be at the law firm of Bendini, Lambert and Locke . Someone at the firm is selling the names and locations of people hiding in the witness protection program and John has been sent to plug the leak.  There he meets Alice, a tough cookie junior associate who might just be John’s dream girl, if he lives through this job and actually gets to retire.

The novel reminds me oddly of a Monty Python sketch, either you understand the joke or not, there really is no middle ground. Some patrons I have recommended this novel to have found it too dark, and can’t identify with John, while others were wildly enthusiastic and found themselves quoting lines from the book.  Personally, I look forward to a long relationship with John, Alice and HR, Inc.