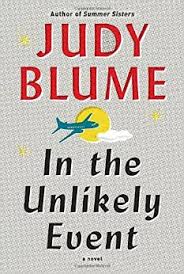 Judy Blume is known for writing about teen angst in books like “Are you there God? It’s me, Margaret”. She has written several books for adults as well, and “In the unlikely event” is her latest. The story centers on a series of real-life plane crashes which Blume, herself, experienced as a teen, and spirals out into the many lives that are changed, redirected and influenced by the tragedies. While the main character is a teenager, a wide-range of adult issues are addressed in Blume’s characteristic insightful prose.

Fact meets fiction as Blume weaves the stories of those who perished in the real crashes into her story. The website http://www.nj.com documents the disasters, and includes historic photographs. On this website Vicki Hyman writes: “One plane crash is a tragedy. Two in the same city is a catastrophe. And three is simply unfathomable. But that is just what happened in Elizabeth over a 58-day period in the early 1950s, a turbulent time for the historic city in the shadow of Newark Airport, and one that serves as the backdrop for Judy Blume‘s new novel…”.

At times I found the cast of characters a bit too long and got their stories mixed up. In her review in Chatelaine, Sarah Liss describes the cast as a “constellation of characters” (www.chatelaine.com). I think an annotated list, like a dramatis personae in a play, would have been useful to keep them straight.

The book’s blurb mentions a commemoration of the crashes decades after the events, which I felt was not given enough attention in the story. Blume reunites the characters and reveals that some things have changed, and some have not.

Personally I think the cover of this book needs a makeover. It’s drab and unexciting. I understand that the story is not a bright happy one, but I think book covers should entice readers and not discourage them. Don’t let the boring cover discourage you!

Despite these shortcomings, “In the unlikely event” is a well-written, tightly woven story. It gives life to historical events of the 1950s including the growth of commercial air travel, the frontier feeling of the development of Las Vegas and the evolving roles of women.