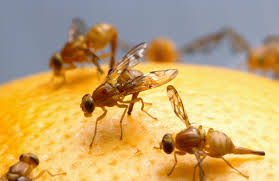 How large unto the tiny fly
Must little things appear!-
A rosebud like a feather bed,
Its prickle like a spear;

A dewdrop like a looking-glass,
A hair like golden wire;
The smallest grain of mustard-see
As fierce as coals of fire;

A loaf of bread, a lofty hill;
A wasp, a cruel leopard;
And specks of sale as bright to see
As lambkins to a shepherd.

Walter de la Mare was an English poet, short story writer and novelist. His primary fame came as a writer of children’s works. He also wrote supernatural horror stories for adults and spent much of his life studying the imagination and how it grows from childhood on. During his lifetime he recieved many awards including the Carnegie medal for British children’s books, and orders of merit from the crown.