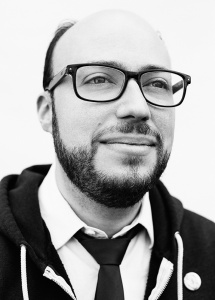 Sean Michaels is a writer and music critic.  His writing has appeared in The Guardian, The Believer, the Walrus, Pitchfork and at McSweeney’s; his first novel, Us Conductors, won the 2014 Scotiabank Giller Prize.  He also founded the music blog Said the Gramophone in 2003.  You can find him online at byseanmichaels.com.

Shauna Kosoris: Your first novel, Us Conductors, is about the life of Russian scientist, inventor, and spy Lev Termen.  Was it difficult to fictionalize Termen’s life?

Sean Michaels: One of the things that drew me to Termen’s story was that his life already felt like a work of fiction. But my favourite novels don’t just tell a story – they’re also doing something else alongside (or underneath) the telling. In Us Conductors’ case, that was the harder part: the story beneath the story, what was going on in the space between the biographical milestones.

SK: Why did you decide to have Lev writing to Clara Rockmore as opposed to one of his wives (like Lavinia Williams)?

SM: For the Lev in my book, Clara became the thing his whole life became oriented against, like a kind of horizon. And although she is the most important person to the text, she is absent from most of it. Lev doesn’t know why Clara did what she did, he doesn’t know how she really feels. By turning these chapters into letters to Clara, by turning the reader into a proxy for her, I wanted to foreground these gaps in the story, the degree to which Lev has invented something, making the reader fall for Lev, or hate him, or wonder where he might by lying.

SK: You founded one of the first music blogs, Said the Gramophone, which is still active today.  Has it been difficult to keep it going for over a decade?

SM: On the easy days it’s a new apple pie. It’s easy as dessert. But over the course of these 12 years, the work has often been hard. At a certain point, any journey can seem a slog. Yet I think that hard joruneys are also often worth taking. And I’m enormously excited and inspired by three new writers who joined Said the Gramophone in January: Emma Healey, Jeff Miller and Mitz Takahashi, who are each contributing weekly posts.

SK: That’s very exciting!  Thinking of joint projects, how did you get involved in We Are the Friction, the fabulous collaboration of authors and illustrators by Sing Statistics?

SM: Jez and Lizzy make such extraordinary, limited edition books. I think they knew me from my blog – they sensed we had similar tastes and then asked me to write two stories for the anthology.

SK: Did you choose to be paired with Lizzy Stewart for that project?

SK: Very cool.  So what are you working on now?

SK: Fair enough.  What book or author inspired you to write?

SM: As a kid I wanted to be a writer because I loved JRR Tolkien. As a teen, because I loved Neil Gaiman and Robert J Sawyer. As a twentysomething it was Salman Rushdie, Kazuo Ishiguro, F Scott Fitzgerald. Now I’m 33 and I’m inspired so much by the pages of Karen Russell, Miriam Toews and Anne Carson.

SK: What are you currently reading?

SK: Back in January, you tweeted to us that you want to visit Thunder Bay.  When are you coming?

SM: My friend the musician Adam Waito has told me so many stories of Thunder Bay – of bike-rides and saunas, labyrinths and persians, wilderness and community. I’d love the chance to visit as soon as I have an opportunity.