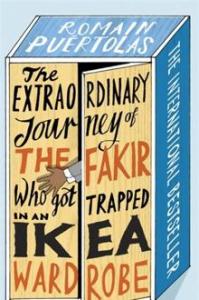 With a title to rival The 100 Year Old Man Who Climbed Out the Window and Disappeared, by Jonas Jonasson, and the Secret Letters of the Monk Who Sold His Ferrari, by Robin Sharma, Romain Puértolas’s first novel is destined to become the next book club sensation. Tending towards cutesy at times, The Extraordinary Journey is, overall, a whimsical story with subtle, yet important, messages on the injustices and inequalities of life and the potential goodness of mankind.

With comical guides to the pronunciation of the main character’s name throughout, the book’s translator, Sam Taylor, has shown enormous creativity, especially given the differences between the French and English languages.

Ajatashatru (a-jar-of-rat-stew; a-cat-in-a-bat-suit; a-jackal-that-ate-you) is a fakir – a trickster and born liar – who has conned the people of his village in India to pay for his airfare to Paris, so that he can buy a bed of nails at Ikea. In taking this journey, Aja unwittingly embarks on a journey of self-discovery, meeting some extraordinary and influential people, as his two-day excursion to Paris evolves into an outlandish, far-fetched journey through Barcelona, the UK, Rome, Tunisia and back to Paris again.

Unaccustomed, and surprised by, the trust and generosity that people bestow upon him during his travels, Aja comes to realize that: “Sometimes people just have to see you a certain way, particularly if the way they see you is positive, in order to transform you into that good person.”  This epiphany is a perfect summation of Puértolas’ views on illegal immigration and the injustices inflicted on those seeking “the good life.”

A novel not intended to be taken too seriously, Puértolas demonstrates through the initially annoying, but ultimately affable, Aja that extraordinary things can happen to ordinary people and that everyone is capable of impacting the world.