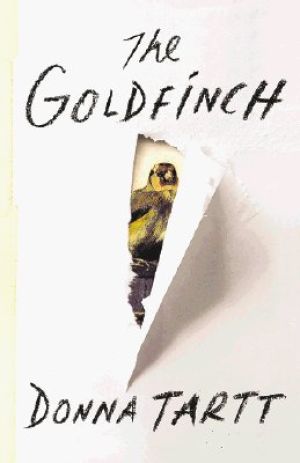 The Goldfinch by Donna Tartt, is the author’s third book and her first new book in eleven years. Selected as one of the ten best books of 2013 by the editors of the New York Times Book Review, and as the 2013 Best Book of the Year by Amazon, it won the Pulitzer Prize for Fiction in 2013. It was also awarded the Andrew Carnegie Medal for Excellence in Fiction for 2014.

The Goldfinch begins with a thirteen-year-old boy, Theo Decker who lives in New York with his mother. One fateful afternoon the two of them step into the Metropolitan Museum of Art to see the Dutch masterpieces, including one of his mother’s favourite paintings The Goldfinch, by Carel Fabritius. A sudden explosion in the museum separates the two of them and results in his mother losing her life and Theo being left on his own. With nothing to his name save this paining of the goldfinch which he has salvaged from the rubble, Theo is taken in by the wealthy family of his friend, Andy Barbour and moves into their Park Avenue home. He cherishes the painting as it is the one thing that makes him feel close to his mother.  This becomes the pivotal feature of the story and ends up drawing Theo into the six billion dollar industry of underworld art.

The Goldfinch is a story of loss, survival and self-discovery, as well as friendship, love and family. Somehow Tartt twists these themes together to produce a lengthy yet riveting novel.

Tartt’s first novel The Secret History was published in 1992. The first edition had a print order of 75,000 copies. It went on to become a bestseller and has been translated into 24 languages. Tartt’s second novel, The Little Friend, was published in October 2002.

Caron E. Naysmith is a member of TBPL staff.