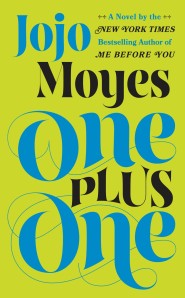 While a favourite in Britain, it was only last year with the publication of “Me Before You”  that author Jojo Moyes became a recognized name on this side of the Atlantic.  “Me Before You”,  is the story of a caregiver, Lou, with nothing but a jest for life and her patient, Will,  a paraplegic with every material advantage, who only wants to die. The novel ended up on so many best of the year lists,  that her next books met with a storm of publicity.  Her followup novel was a World War One French occupation story combined with the contemporary tale of a young widow, in  “The Girl You Left Behind” , and her most recent novel is “One Plus One”.   Her latest novel follows the adventures of Jess Thomas, her math genius daughter Tanzie, her sort-of stepson Nicky, who is being regularly bullied by a group of vicious town thugs, and their odoriferous dog, Norman.  Jess has been raising her children on the meager wages earned by working as a waitress and cleaning houses for a living in a seaside community composed of the wealthy vacation home owners and the struggling populous who actually live there.  Money is tight at the best of times, and Jess’s long gone and dead-beat husband does nothing to support the children.   An amazing opportunity comes for Tanzie to attend a prestigious private school due to her outstanding math abilities but Jess needs the to contribute 500 pounds to make it happen.  At the same time as part of her cleaning duties, she meets Ed Nicholls, a multimillionaire technology wizard, hiding in his vacation home  while under investigation for insider trading. All Jesse needs to do is get the kids and Norman to Scotland, so that Tanzie can win the money in a Math Olympiad, so through circumstances bordering on the absurd, Ed finds himself ferrying the family on their quest.

The novel runs the gamut from silly to sentimental, and from romantic to poignantly bittersweet.  Each of the characters grows and develops throughout the novel and its a book that emphasizes the importance of the family dynamic as much as it does the  developing  central love story.  Moyes is a rare writer who can be enjoyed by everyone, while not being typecast as writing a single genre of book.  I will be looking forward to whatever she tackles next and catching up on her back catalogue.