To continue with some reviews for Pride Week, I have a collection of lgbt related graphic novels that are part of TBPL’s collection. The three comics are: Drama by Raina Telgemeier, Kevin Keller by Dan Parent and A + E 4Ever by Ilike Merey. Each of these have characters in the lgbt community with vastly different stories and demonstrates their various struggles, and most importantly shows how great these characters really are.

Drama is one of our children’s graphic novels and it is definitely a really cute story. It follows Callie and her attempts at being the best set designer she can for her school’s production of Moon Over Mississippi. Not only does the drama appear on stage, but also off the stage as well. This story has it all including crushes on boys, the appearance of two cute brothers as well as the general teenage drama that comes with middle school. It truly is a drama-filled work of art, and it demonstrates how the lgbt community can be treated mostly positively in schools. It is one of those books that shows how acceptance can happen even when coming out so young. I highly recommend this one for anyone who is a fan of graphic novels, as it is definitely not just for children.

Almost everyone has read an Archie comic growing up. And if you haven’t, you really should since they are all kinds of awesome. And recently, the series has added a new character, Kevin Keller. There has been quite a bit of backlash on this character as the Archie comics have generally been seen as “wholesome” literature. However, this new addition is great. Not only is Kevin not a stereotypical homosexual character, he is also a big hit. It’s great to see a gay character that isn’t simply a contrived stereotype. On the contrary, Kevin is a figure that other homosexual youth can look up too. This is partly because he is not defined exclusively by his sexuality. For example, he loves journalism and wants to serve in the military. This is super unheard of especially with all the gay men in television. It is all quite refreshing. Check this mini-series out for yourself. Whether or not you’re a fan of Archie comics, I doubt you will be disappointed.

The last graphic novel I’m reviewing is A + E 4Ever. This one is quite different from the other two. While it shows the life of lgbt characters, it shows it in a more stylistic and grittier way. The story revolves around its two main characters, Asher, an androgynous boy who has a fear of being touched and loves art, and Eulalie the tough “dyke” at the school. It is an interesting mix of the lives of straight and gay teens as it blurs the lines of sexual orientation, gender, love and friendship. A + E shows that not everything can be black and white that there can be a grey area in many things. I think this is an important aspect to read about especially during Pride Week, when we can all afford to learn new things, think about acceptance, tolerance, love etc. It’s a really gripping story and while the distinctive artwork may take some getting used to, you will not regret reading it. 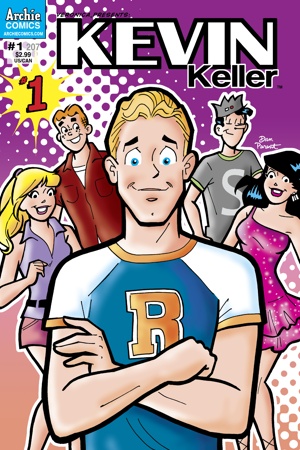 View all posts by librarianguy