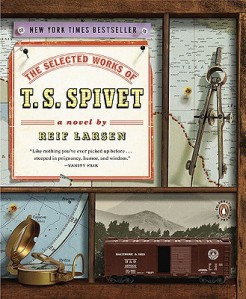 Question 1: What essential tool is required to bring a Union Pacific freight train, with a potential weight of 1.2 million pounds to an unplanned and unexplained, grinding halt? Answer: a single red Sharpie of course.

Question 2: How do you convince the Under-Secretary of Illustration and Design at the Smithsonian Institute that you are not a 12 year old boy but a Professor at a University with a highly esteemed and well-established research agenda? Answer: Withhold and, perhaps, falsify information.

As T. S. (Tecumseh Sparrow) Spivet says: “I didn’t often remember I was twelve. Life was too busy to dwell on things like age…” And, T. S. is certainly a lot busier than most young lads. An obsessive mapmaker, drawer and annotator of the world that he experiences around him, his precociousness would give Alan Bradley’s Flavia de Luce a run for her money.

The story opens with the Smithsonian Institute’s phone call, informing T. S. that he has won the prestigious Baird Award for his illustrations of Carabidae brachinus, the Bombardier beetle. Nominated by his friend Dr. Yorn without T. S.’s knowledge, the Institute offers to fly him to Washington for his acceptance speech and to take up a yearlong fellowship.  T. S. eventually accepts the offer, but withholds the minor, but crucial, detail of his age.

T. S.’s family are also oblivious to what’s going on as he secretly sets off for Washington without telling them anything. Before leaving, he agonises over the packing of his suitcase which, in the end, contains such vital items as underwear galore, two heliotropes, four compasses, a Berenstain Bears handkerchief, two sextants and one octant. On impulse, he also absconds with one of his mother’s notebooks from her desk.

The contents of the suitcase tell us all we need to know about T. S.: the juxtaposition of brilliant scientist and 12 year old, inexperienced child. We witness more of this as we journey with him on his hilarious and exciting adventure “hoboing” by freight train and Winnebago across America. We also learn more about his family and the relationships he has with them. He only ever refers to his mother as Dr. Clair: he is worried that her career as an entomologist isn’t progressing. His father, a cowboy to the bone, has little patience for T. S.’s science-based suggestions for improving work on the farm and mourns the loss of T. S.’s younger brother who died through an accidental shooting. His older sister is a typical 16 year old with what T. S. refers to as tendencies towards “awful girl pop.”

Reif Larsen was 28 years old when he wrote this his first, initially perfect and wonderful novel. The only flaw is when T. S. arrives at the Smithsonian Institute and the story turns into a bit of a dog’s breakfast, getting very silly indeed. This is still a must read novel, however, for as Leo Tolstoy once said: “If you look for perfection you’ll never be content.” Hailed as both brilliant and original, you’ll love the expanded margins filled with T. S.’s musings and drawings.