New Zealand born fantasy writer and podcaster Philippa (Pip) Ballantine is the author of the Books of the Order and the Shifted World series. She is also the co-author with her husband Tee Morris of the Ministry of Peculiar Occurrences novels. Her awards include an Airship, a Parsec, the Steampunk Chronicle Reader’s Choice, and a Sir Julius Vogel. She currently resides in Manassas, Virginia with her husband, daughter, and a furry clowder of cats. You can find her online at pjballantine.com and ministryofpeculiaroccurrences.com.

Shauna Kosoris: I really enjoyed reading your four Books of the Order this past fall, especially the first one, Geist. What inspired you to write them?

Philippa Ballantine: I started the Books of the Order with two inspirations. I wanted to write about a slightly older character than is usual in fantasy, and explore what happens when a character who is powerful ages. How will that affect them? The other idea came to me while I was watching Ghost Hunters. What if we lived in a world where the supernatural was not something we chased around trying to prove? What if it was just an accepted fact that we had to live with?

SK: Did the world of Geist go through any different iterations before ultimately becoming what it is today?

PB: Strangely the Geist world arrived pretty fully formed. The reality of ghosts immediately sparked the idea of a group of people to defend against that. The structure of the world almost immediately became somewhat similar to nineteenth century Russia. I’ve always had a fascination with that part of the world and its complicated history.

SK: While all of your main characters in the series were interesting, I was particularly intrigued by Raed and the Rossin. What was your inspiration for them?

PB: I am a huge history nerd, particularly around Scottish history. The Young Pretender in Scotland was Bonnie Prince Charlie. He was a man that wanted to be king, and had been brought up with the idea that he should be king. Raed is also a Young Pretender to the crown. His grandfather was kicked off his Imperial Throne, and Raed’s father fled with him to exile. However Raed doesn’t really want to be the Emperor, but he cannot escape the dangers that being who he is impose. In addition he is lumbered with the familial curse, the Rossin, the beast who lives inside him.

The Rossin is inspired by my love of big cats. Their strength and magnificence is entrancing, but they are deeply wild. I wanted to do a were creature of some kind, but not in a way that anyone would want. The Rossin is not just a beast, he is also a supernatural geistlord, who is satisfied by blood and chaos. His magnificence and wildness comes from that, and he is a force to be reckoned with. This is no big cat that anyone can tame.

SK: Your Ministry of Peculiar Occurrences series was co-written with your husband. What’s it like writing with a co-author?

PB:At first, getting to know your co-author’s style and working methods is quite a learning curve. Tee and I have got into quite a groove with collaborating. We used to be very strict as to who wrote what scenes; it was Eliza for me, and Wellington for Tee. We then would edit each other’s work, inserting our own little embellishments along the way. However, by book three we are a lot more loosey goosey with who writes what, as both of us know both characters so well by now.

The best bits of having a collaborator are the brainstorming sessions, and working on dialogue together. Tee and I are both big fans of the banter! It is wonderful when you get stuck to have someone else to help you out of the plot ditch. It also helps if you know how to argue without getting personal.

SK: You have a new book from that series, Dawn’s Early Light, coming out this month. What can 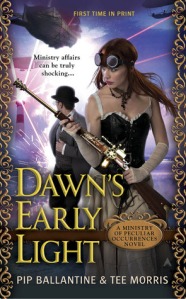 you tell me about it?

PB: Dawn’s Early Light is Eliza and Wellington’s trip to the United States. They find themselves working alongside their counterparts there, as they try and find out why whole vessels are disappearing off the coast of North Carolina. Along the way they run into old enemies, and try to sort out what direction their relationship is taking. It’s a romp across America, with lots of airships, hypersteam trains, and automobiles along the way.

SK: What are hypersteam trains?

PB: They are a totally steampunk invention, where the steam is recycled and harnessed again to make the train go even faster. We needed a train to go really fast, since our characters move so quickly!

SK: I see that you have largely written book series, rather than standalone novels. How does the planning process differ when you’re writing a series rather than a single novel?

PB: When writing a series you have to imagine the overarching storyline, as well as the smaller story resolutions contained in each novel. In the Books of the Order, for example, I knew that each book would be a case that Sorcha and Merrick would solve, but in addition it would move them towards a grand unveiling of a conspiracy that was aimed directly at the heart of the Empire they are sworn to protect.

You also have to imagine the final destination of your characters. Will they survive? How will they have changed when they get to the last book?

SK: Have characters ever surprised you by doing something against your plan?

PB: I have had one character that ended up running amok. It was when I was writing Chasing the Bard, which was Shakespeare and deadly Fey creatures. Puck turned up, and I thought he was going to be a walk on role. When he took over it was slightly strange and very exciting. Since I gave him his own novel, Digital Magic, he’s been quiet…but I wonder if he might just crop up in another novel wearing another face.

SK: You are also a very active podcaster, having written several novels and short stories. What is it like working in that medium?

PB: I love it! It’s been eight years since my first novel, and I podcast four novels in total. Now I am working mostly in the short story medium, and Tee and I have a podcast called the Shared Desk (theshareddesk.com) where we talk about being writers and geeks. I adore how we have this connection with our readers, some who have been listening to us from the very beginning. It is also rather helpful to read your work aloud, it shines a light on the mistakes you’ve made.

SK: What was your favourite series that you’ve written (thus far) and why?

PB: The favorite child quandary. I guess I always am most in love with the story I am currently working on. So at the moment my true love is a series with the first book titled Immortal Progeny. It’s epic and grand, full of gods and monsters and I am having a blast tormenting all the characters.

SK: That sounds exciting! I’d like to finish up with a couple of questions about what you read. What book or author inspired you to write?

PB: The works of CJ Cherryh inspired me from a young age. Not only was she a magnificent example to me as a teenager of a woman making it as a writer, she also wrote flawed, powerful, and sometimes terrifying female characters.

PB: Wild Seed by Octavia Butler. This book made my head do mad turns with its examination of the ‘other’ and it has stayed with me since I read it. It spanned time and shape in ways I haven’t read before or since.

SK: What are you currently reading?

PB: Right now I’m not reading since I rarely do that while writing, but I was working my way through the Republic of Thieves by Scott Lynch. I’m in love with Scott’s characters and world, but I’m only allowing myself to return there once I am done with my own novel. It is the curse of writers not to do nearly as much reading as they would like.

One thought on “Interview with Philippa Ballantine”