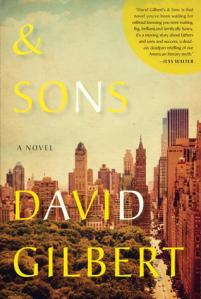 The great American novel, and behind it, the great American author, aggrandized to god-like status. J. D. Salinger, Philip Roth, F. Scott Fitzgerald and Ernest Hemingway: venerated men with their enigmatic lives and brilliant minds. Add to them David Gilbert’s A.N. Dyer and we catch a glimpse of the flaws, the cracks in the façade; the potential cruelty and arrogance, all obfuscated by the simple fact of fame.

& Sons opens with Dyer attending the funeral of his closest, lifetime friend, Charlie Topping. At age 79, Dyer is a shadow of his former self. Notorious as a recluse, and suffering from gout and self-pity, he is the author of Ampersand, that great American novel renowned for evoking the very essence of teenage angst whilst speaking to the hearts of all who read it. At the funeral, Dyer has a near breakdown, and realizes that he needs to call his three sons back home for a family reunion. Having shown more attention to his writing over the years than to being a good father, he becomes obsessed with ensuring that his third son, Andy, is cared for after his own, eventual death.

Seventeen-year old Andy is half-brother to the much older Richard and Jamie, and he is the cause of the Dyer marriage breakup. An ebullient and sanguine teenager, desperate to lose his virginity, he is the apple of his father’s eye, with a mind as clever and just as quick. Richard and Jamie, being Dyer boys – Ampersand Sons – so to speak, inevitably carry the scars of their uncommon upbringing. Richard took the hard road of drugs as a youth, becoming a substance abuse counselor as an adult. He’s never forgiven his father for using his childhood journals as material for a novel. Jamie’s career choice as a documentary filmmaker covering human misery is symptomatic of a deeply troubled soul. Regardless, and perhaps because of this, all three sons are interesting and engaging characters.

As a fourth wheel to the story, Philip, Charlie Topping’s son, serves as narrator of the Dyer tale. He was a childhood friend to the older boys, and an ardent admirer of Dyer himself. He insinuates himself into the family home after basically ruining his life with an affair. Despised by, and generally ignored by the Dyers, he delivers an uncanny and insightful account of their thoughts and motives. He is an excellent storyteller, and yet, we can’t help but loathe him as well.

& Sons is the quintessential story of how our families define us. Although flawed in small, forgivable ways, it is the best contemporary novel I’ve read in a long time. I’ve always been sceptical of writers writing about writers (is it simply a case of safely sticking to what you know, or a serious lack of talent to dabble beyond?) but Gilbert succeeds in blasting both speculations to billy-o.  A man with arrant talent, he has emerged from relative obscurity onto the literary scene with a big, multi-layered novel that continues to unravel itself long after you’ve finished reading it.