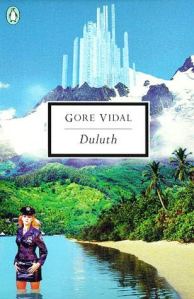 Duluth by Gore Vidal is unlike any other book I have ever encountered.  It is supposedly set in Duluth, Minnesota, the city of about 86,000 people that is 3 hours south of Thunder Bay.  But here is a description of Duluth from the first page of the book: “From the rows of palm trees on Duluth’s langorous lake front to the elegantly better homes and gardens […]two million human beings have their being in a dynamo of city where their nonbeing is provided for.”  Yes, the city just south of us, that has the same climate as Thunder Bay, has palm trees.  But wait, there’s more: “All appetites are catered for in Duluth.  From casual lake-front sex to warm meaningful relationships in the ethnic barrios at the glittering desert’s edge, there is something – if not someone – for everyone.”  So now Duluth’s by a desert as well.  But on the second page, we find out that the northern lights are out at noon in February because apparently there’s no sunshine during the winter months (making me wonder how those poor palm trees survive the cold).  A few pages later, Duluth is on the banks of the Colorado River which empties into Lake Erie.  It’s also on the Mexican border.  By now you may have realized that Gore Vidal has absolutely no sense of geography.  On Twitter I called it “a magical place that is next to both the Great Lakes and the Mexico border;” a friend of mine replied by saying “Two words: ‘Suburban sprawl.'”  That’s quite the epic sprawl for two million people.

The plot is just as nonsensical as the map.  There’s a flying saucer located in the city somewhere.  The first two characters we meet suffocate in a car that gets trapped in a snow bank, which then starts a bizarre discussion about how there are only a limited amount of characters in existence; apparently they get recycled from plot to plot, book to television program, reincarnating with only the briefest of memories of their former lives.

Of course, if you’d like to give it a try you’re more than welcome to.  The New York Times gave it a good review back in 1983 and it averages 4/5 stars on both Amazon and Goodreads.  It’s even considered a 20th Century Classic by Penguin Books.   But I don’t know what book they were reading; I only got about 20 pages in when I gave up all hope for Duluth.  Sure, I like fantasy, but good fantastic fiction has a setting that makes sense, one that you can willingly suspend your disbelief for.  Duluth just doesn’t make that standard.  It really doesn’t make any of my standards for a good book and so I moved on to something better.  Like The Walking Dead.