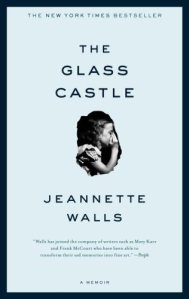 This book was hugely popular when it first came out in 2005 and continues to be seven years later. I’d put off reading it until now and am left wondering why. Walls’ life was a veritable train wreck – the kind of thing you just can’t turn your eyes away from. I spent a lot of time mentally cringing, while at the same time hating myself for almost admiring her parents. Ultimately, though, Walls’ parents are complete basket cases, and it’s astounding that any of their children even survived childhood, let alone go on to lead normal lives.

The story opens with Jeannette heading off in a taxi to a party and catching a glimpse of her mother, Rose Mary, on the street, rummaging through a dumpster. Her mother and father are both eccentrics – incredibly intelligent and knowledgeable, but incapable of conforming to any social conventions.

At the age of three, Jeannette ends up in hospital after being badly burnt whilst cooking hotdogs on the stove. The Walls children had to basically fend for themselves, getting through life the best way they could, which quite often meant scavenging through rubbish bins in the washrooms at school for their one meal a day (if they were lucky). Doing the Walls scadaddle, as it became known, was the norm each time the law or social services got a little too close for comfort. The family found themselves uprooted too many times to remember, heading off into the night to goodness only knows where, in a beat-up old car that only made it down the road if fortune smiled upon them.  Even when good luck came their way, they always managed to screw things up. Rose Mary inherited a house from her mother, but instead of maintaining it or paying the bills to keep things going, it becomes derelict and infested with cockroaches and termites.

Rose Mary could rationalize anything. Cockroaches and rats have a right to live just as much as anything else, as do the flies that feed upon the food they leave out because they don’t have a refrigerator. Why feed the pets? They only become too dependent upon you. Why waste time cooking a meal that gets gobbled down in 15 minutes when you could be working on a painting that could last forever?

The father, Rex, is a charmer, a dreamer and gunna man. He can’t hold down a job and has a reputation as the town drunk. When he’s on the booze he’s mean and conniving, and when he’s sober he would do anything for his family. The most touching moment in the book is when he couldn‘t afford to buy the kids a gift for Christmas, so he took each of them one by one out into the desert, sat them down and told them to choose a star, which would then be their’s to own. When they’d chosen, he told them all about the star and its importance. The kids felt like the most special people on the planet.

This book will leave you shaking your head. I highly recommend it.