This took me by surprise during the first book, Shadow’s Son.  Caim is hired for a seemingly straightforward job; he discovers at the last possible moment that he’s been set-up.  Saving Josephine, the daughter of his last victim, Caim finds himself injured and on the run.  But Caim has made this city his home and he refuses to leave without a fight.

Continuing Caim’s story of terrible luck, Shadow’s Lure picks up right where the first book left off.  This time, after healing from his previous adventures, Caim goes off in search of answers from his past.  His path leads him directly into an angry bear.  After getting mauled, he then stumbles into the middle of a war.

I’m hoping that Shadow’s Master, the third and final book in the series, will continue in this same vein.

But beyond Caim’s misadventures, Shadow’s Saga has been an excellent read.  Kit is an excellent companion to Caim, and reading about her is always fun.  In Shadow’s Son, Josephine was also an excellent character; at first glance she is the stereotypical aristocrat’s daughter but throughout the story she proves herself to be made of steel.  Unfortunately this doesn’t continue in the second book, which was a real loss for the series. 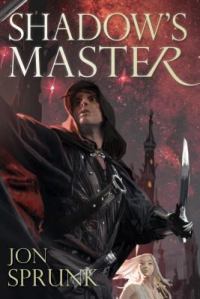 Overall, I really enjoyed the Shadow’s Saga.  If you’re looking for a grittier fantasy that still manages to be fun, this series is for you.

One thought on “The Shadow Saga”