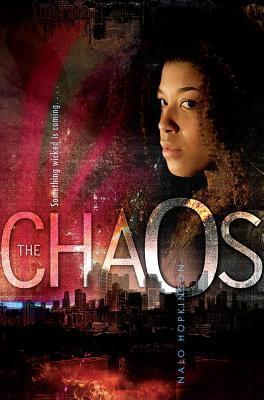 There were many, many things I really liked about The Chaos. I loved how real Scotch’s voice was and her interactions with her brother and family rang very true for me. It may be a cliche for the teen girl to change into more conservative, parent-approved clothes before heading home, but it helps establish Scotch’s character and family dynamics. The Chaos is certainly an original end-of-the-world scenario in a sea of other YA apocalypses. The distorting, manipulating, oozing rolling calf was a great addition to the story, especially in opposition to the rule-dominated Russian folktale witch character (who shared many characteristics with traditional Western fairy tale witches, like the one in Hansel and Gretel). Some reviewers have complained about the inclusion of the rolling calf as they are unfamiliar with it. I think anyone familiar with fairy tales can figure out what sort of mythological being it is. And if it inspires some young person to look up rolling calf and duppies and Caribbean mythology to learn more then so much the better.

I feel a little ridiculous making the following criticism of a novel called “The Chaos”, but nonetheless: the book is a little too chaotic. I really liked the opening parts, especially the characterization of Scotch and the way she thinks about boys. I can’t remember ever reading a teen girl POV that struck me as so absolutely authentic, especially in terms of responding to the male gaze. Once the Chaos hits and things start happening – the volcano, various transformations – those authentic reactions seemed to disappear. Everyone, not just the main characters, responded extremely calmly to the situation considering what was happening. It made the stakes seem quite low. People were worrying about last family, but no one was losing their minds over the fact that the the world was absolutely mad. At one point someone suggests that the Chaos is manifesting people’s inner inner lives, but this has little resonance in terms of the story as any connections, if they exist, are very hard to decipher. Scotch’s journey is very haphazard, and

SPOILERS START HERE! SKIP IF YOU PLAN TO READ THE BOOK!

the resolution was equal parts confusing and annoying. It’s unclear whether Scotch’s triumph meant the end of the Chaos or if they are unrelated events. On the one hand, Scotch was privy to early signs of the Chaos, so maybe she has a significant role in its outcome? But on the other, so did other school children who seem to have nothing else to do with the story. Also, we end up back in school where we began without any discussion of the repercussions of the Chaos or even an idea of what the time frame was between its end and our new present day. The lack of significant lasting impact (other than her brother reconciling with her parents, Scotch’s personal growth and her new skin colour) made the whole novel seem insubstantial. Those are significant impacts, especially Scotch’s personal growth and the meaning of her changed skin colour, but I feel like it is a bit of a poor return for the entire world gone completely insane. Scotch even keeps thinking about a dance contest throughout her ordeal, and mentions at the end that it had to be cancelled because too many participants were “missing, injured or dead.” It just all seems a bit trivial.

I love Nalo Hopkinson’s Midnight Robber for its mix of Caribbean mythology, amazing characterization, and science fiction and hoped that The Chaos would be similarly engrossing. For me, it wasn’t; but I would certainly recommend it to teens who are bored of the zombie apocalypse, interested in strong, active female characters, looking for representations of their culture and experiences, and like creative imaginary worlds.