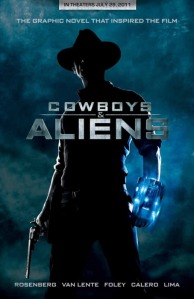 I was really excited to see the recent movie “Cowboys & Aliens.”  Starring Daniel Craig and Harrison Ford, I knew that whatever else it may be, it was going to be entertaining.  And in that regard, it totally lived up to my expectations; the movie starts out as a Western and then aliens attack.  It is a lot of fun, and Harrison Ford’s performance alone made the movie well worth watching.

When the movie was over I decided to watch a few of the behind the scenes features where I discovered that the movie is only inspired by the graphic novel; the movie is telling a completely new story.  So of course I had to go get the graphic novel to see just how different the two are.  Even knowing that these are two different stories, I was completely unprepared for just how different they were!  Yes there are cowboys, Native people and aliens who all end up fighting.  And yes, the cowboys and Native people must work together.  And there’s a helpful alien.  But that’s where the similarities end.

The graphic novel also characterizes the aliens in a way the movie did not.  In the movie, the aliens were big and scary monsters.  The only one 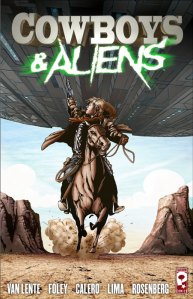 who is really characterized is the one who was hurt by Daniel Craig’s character; that alien has a large scar on its face, and clearly wants revenge.  In the graphic novel there are several different aliens who land together on the ship.  Their leader is a total jerk who thinks he’s superior and is damn well going to show it (ie. kill people) using all his technology.  His initial second in command questions his orders, and is swiftly replaced after a “friendly chat” to discuss things.  The aliens were also basically slavers, not bizarre and scary prospectors.  In this way it was much easier to relate to the graphic novel’s aliens; sure they’re different, but their motivations are human.