Tim Myers and the Cozies

I know, I know. It’s been such a long time since I’ve posted anything (or so Lori, the blog’s administrator keeps telling/reminding me). To be honest, I have wanted to write a Backlist blog entry but I really haven’t anything special to write about. Lately I’ve been reading a lot from a genre called Blah. In fact, I had to step away and go back to an author I had completely forgotten about and overlooked.

As I was scanning the paperbacks at the Brodie library, my eyes locked onto a series by Tim Myers that I haven’t read yet: The Soapmaking series with main character Ben Perkins, who works with his family making and selling soap. As he and family run the business there always seems to be a murder to be solved. These books are what’s called a “Cozy Mysteries”. They are very easy reads with a G-rated feeling that one can enjoy and not have to think to hard about it (think Murder She Wrote or Hallmark Channel). Now, I know what you’re thinking “Derek, you’re too manly to read these so called ‘Cozies’, you’re much too deadly for that”.  Well, think again compadre, I find these books relaxing and nice break sometimes to the Cormac McCarthyesque  tomes I usually read (while chopping firewood and working on race cars of course). 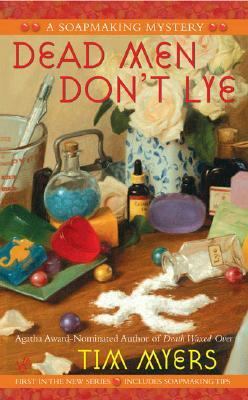 Tim Myers tells a story that runs fluid from beginning to end and leaves the reader actually caring for the people involved. I always end up thinking about what it would be like living in these small towns where life is somewhat simpler (except for the pesky occasional murder). Besides the soapmaking series, I have also enjoyed the Lighthouse Mysteries and the Candlemaking series and I have just found out that there is another series called the Cardmaking series. While I love each series, the Candlemaking series is my favourite.  Protagonist Harrison Black learns that he has inherited his Great Aunt’s candlemaking shop after she is murdered. After inheriting At Wick’s End, he sets to learn and love the process of candlemaking while tracking down his relative’s killer. If you are fan of who-done-it’s and want a fast read that won’t take a lot out of you, please give this author a try.

PS. While taking a look at Tim Myer’s works for this blog, it seems his name is just a penname for a person who has a number of other pennames. Looks like I’ll have more “Cozies” to read in the future (when I’m not bench pressing 400 pounds or karate chopping down trees…………..ummmm, yeah, that’s right).

View all posts by derektbpl