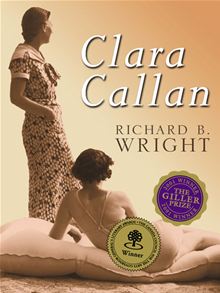 When I heard they were finally making a movie of “The Guernsey Literary and Potato Peel Pie  Society” , it brought to mind another novel told primarily in letters and journal entries.  Clara Callan, is the story of two sisters from the small Ontario town of Whitfield.  Clara remains at home, a quiet poetry writing schoolteacher while her sister Nora runs away to New York and eventually becomes a radio “soap opera” star.  While the lives of the woman are wildly diverse, the link between the two remains strong.

The letters and journals cover the period 1934 to 1939, and the backdrops of the Depression and the growing tensions in Europe figure heavily into the concerns of the characters.  With the death of their father and Nora leaving for New York, Clara is left  to pick up the pieces of her life. Though spinisterish and in her thirties, Clara longs for love and adventure but after she is attacked, Clara is forced to make a difficult decision which shakes her foundations and sets her life on an altered path.  Nora, who is the flighty, pretty sister and  whose life looks glamourous in comparsion seems to struggle in relationships, her closest friend being the lesbian writer of her radio show , Evelyn.  The style of the letters tell much about the character; Clara’s are formal, poetic and sad, while Nora’s letters reflect a brassy, bouncy, all showbiz front nature . Evelyn writes as well, with her words being bitter and caustic, with a cutting wit.

In these days, of emails and tweets, the lure of the letter and it’s intimacy of communication remains strong.