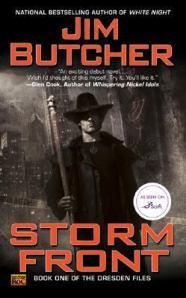 Sadly, I’m skeptical by nature so it took a lot of convincing by friends to try “Storm Front” the first book in the Dresden File series by Jim Butcher.  In fact, I actually downloaded it for the car instead of grabbing the print version so that if it was horrible, I’d have the option of turning on the radio instead.  All I really knew was that it was about a wizard detective from Chicago named Harry, which sent my brain screaming “Yeah, like right.”  From the opening lines (read brilliantly by James Marsters, better know as “Spike” on Buffy the Vampire Slayer), I was completely hooked.

The narrator and main character of the novels is Harry Blackstone Copperfield Dresden; part detective, part wizard, mostly broke and totally charming.  Harry is who the Chicago police go to, when they have a case that defies explanation.  His main contact on the force is Lieutenant Karrin Murphy of Chicago’s Special Investigations Unit.  Their relationship is tempestuous at best.  She cares about Harry but she needs Dresden to do her job properly, so Karrin is also frequently frustrated when Harry keeps information from her. His reasons vary, sometimes because its magical knowledge that she wouldn’t understand or believe and sometimes he does it to protect her from the real and usually very evil things that go bump in the night.

Since every good detective has a sidekick, Harry has Bob. Bob is the spirit of a long dead wizard who was sentenced after death to spend eternity trapped in his own skull. Bob is Harry’s window into the spirit world, helping him create potions, cast spells and find clues to supernatural dangers. He also enjoys razing the heck out of Harry with clever barbs and witty retorts. It’s easy to forget that Bob is something beyond mortal.

The first book concerns an evil wizard who is using the power of thunderstorms to generate enough power cause death from a distance and produce demons and giant killer scorpions.  The police are helpless so it falls to Harry to stop the killing and expose the wizard before he gets blamed for the crimes.  Currently I’m listening to number 3 and reading number 4 in the series, so if the addiction gets worse,  I’m in big trouble.