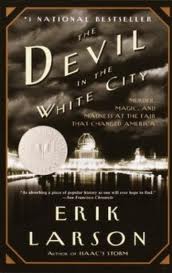 While my reading tastes normally stick to fiction, every once in awhile I have to try out a non-fiction book (especially when a fellow co-worker says you just have to read this book and won’t leave you alone till you do. HA! Just kidding Lori). In truth though, Lori was explaining the concept of this book and it really piqued my curiosity.  Larson’s The Devil in the White City is a true crime novel wrapped up in fantastic history lesson involving the Chicago World’s Fair (World’s Columbian Exposition). This story takes place during the late 1800’s, early 20th century and centers around two men who are the complete polar opposites. The first man, Daniel H. Burnham was the chief architect of the Chicago World’s Fair and the second, a grisly serial killer with the alias H.H. Holmes. While one man struggles with the enormity of building a fair to rival anything ever done in the past, the other takes advantage of the chaos the building of the fair brings to the city of Chicago in order to easily commit murder.

To be quite honest, while I have heard the name Chicago’s World Fair before, I really had no clue what it actually was, when it took place or who was involved. What I really loved about this book was Larson’s account of early Chicago and the building of the fair and everything that went into it. While reading the book, I could not get over the size of the fair or Burnham’s brutally unrealistic timetable for completion. I feel that I can now confidently answer a number of Trivial Pursuit questions about the subject, such as who created the Ferris Wheel and for why was it created?  To find out the answer you’ll have to read the book……or just Google it. I also had no idea that there was a serial killer operating out of Chicago either near the turn of the century. Larson also does a great job of recounting the tale of H.H. Holmes. As this manipulative, charming but stone cold sociopath finds himself in Chicago, he must’ve compared himself to a kid in a candy store. As crime ran rampant in the streets of Chicago, disappearances were actually quite a common occurrence, much to Holm’s chagrin.

The only thing I can comment on is personal taste. While I did find the story of the World’s Columbian Exposition intriguing, I found myself wanting to skim over some chapters in order to get to the chapters involving Holmes. However, my patience persevered and I can say that I really liked this book. Okay, enough of this non-fiction stuff, back to a good Lee Child thriller.
—

One thought on “Devil in the White City by Erik Larson”