You might already be familiar with the myth of Atlantis. The Greek genius, Plato, wrote about it in his famous works the Critias and the Timaeus about 2000 years ago. When he wrote about Atlantis, that great, lost civilization “beyond the Pillars of Hercules” he stated that the hey-day of Atlantis was many thousands of years before his time! 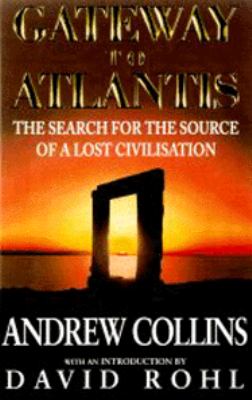 when he was searching for spices from India (hence, “Indians”).

What Collins does in this very interesting book is look beyond those myths at the source of the story.

Collins looks at historical evidence such as maps and letters from Europe at about the time of Christopher Columbus and the years before. What is interesting in the maps are islands and island names that either show a mid-atlantic island, which never really existed, or name existing islands as if they were related to the Atlantis story.

And he goes way back in time and looks on both sides of the ocean for sources of names and the earliest traces of stories that relate or could relate to Atlantis. These aren’t just flights of fancy, either, as Collins does a very good job of remaining an impartial data-collector.

He explores how Plato may have received the story; likely the result of Egyptian “King’s lists” that date back thousands of years before Plato’s time. So he wonders where the Egyptians got the story of Atlantis. Was the Phoenicians, the Carthaginians, North African sailors? Possibly. Collins makes the case, but keeps going further. Where did these pre-Columban trans-Atlantic navigators get the original story of Atlantis.

Well, from the (possible) descendants of Atlantis, of course. These are the people of the Yucatan peninsula, as well as the people who migrated from the Caribbean islands shortly after that area was struck by a comet. This, according to Collins, was in approximately 8500 BC, or roughly the same time period that Plato alludes to.

Orthodox archeology states that people didn’t live in Cuba or in the above-mentioned islands at that time (8500 BC), but there is evidence of human habitation in the form of fossilized footprints! Add to that the evidence of “fiery serpents” flying through the sky, and pictographs in underwater caves, and geological evidence of once-connected islands and its up to the reader to decide how true the myth is.

Collins paints a picture of an island culture that suffered a cataclysm, a story that became the origin stories of future cultures, that eventually diffused across the Atlantic to Europe and the Mediterranean that then became the inspiration for Plato’s Atlantis: a fanciful re-telling of a much older, but true, story.