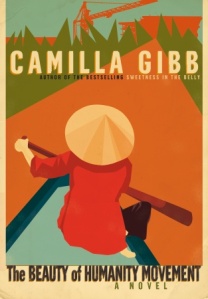 What a fabulous book! This is a story about food, religion and love, which makes it sound an awful lot like Eat, Pray, Love, but thank goodness the similarity ends there: no shallow, rich chick in this one.

Old Man Hung is the pivotal character for the story: the ninth son of a poor rural family in Vietnam. He is sent to live with his uncle in Hanoi by his mother, who is both superstitious and repulsed by the large facial mole Hung was cursed with from birth.  Sending him away, though, was the best thing she could have done for him.

His uncle is a Pho maker – a noodle-based soup that requires an enormous amount of patience and attention to make it taste just right. If you don’t put in the effort, you may as well have not bothered. Under the expert tutelage of his uncle, Hung becomes a highly esteemed craftsman, and the locals flock to his shop for their daily intake of Pho. This is Vietnam, though, in the 1950’s, when the Communist Land Reform was in full force, and peasants, accused of being land owners, were rendered homeless, tortured or killed. Anyone not conforming to the ideology of the regime was sent to “re-education” camps. Hung’s Pho shop was the meeting place for the Beauty of Humanity Movement, a group of artists espousing their own ideals of the perfect communism through illegal publications of prose, poetry and art work.

Hung loses the shop and has to sell Pho illegally on the streets. He is a survivor, though, and despite living in a shanty town with few, if any, ingredients with which to make his beloved Pho, his inventive use of obscure foods results in some unbelievable creations. Even skimmed pond weed can be transformed into a delicious vermicelli dish, and when you get down to it, there’s absolutely no part of a pig that can’t be used in some edible dish…. really. Through his cooking and generous nature, Hung inadvertently becomes the moral and nutritional patriarch for an entire community.

One of the most enjoyable aspects of this story is the way Gibbs weaves in a contrast of the old ways of communist rule with the emerging capitalism of the mid-20th century. A family, close to Hung, whose father was a member of The Beauty of Humanity Movement, provides insight into how old and new can co-exist. The young borrow from western culture but give it a uniquely Vietnamese twist. Their attitudes toward westerners are still firmly rooted in the old ways, and people, even Vietnamese who have spent time abroad, known as Viet Kieu, are generally viewed with a combination of amusement, astonishment and, at times, awe. To be a Viet Kieu, though, is also to be viewed as suspicious.

So, this book is a wonderful read if you enjoy fiction based on fact. The characters are endearing, and Gibb writes with such clarity that you can see their faces – a rare gift indeed.