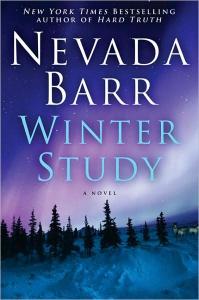 Nevada Barr is not one of those authors I’ve ever shown an inclination to read: the name just sounds way too Country & Western for me. However, when two independent library patrons recommended it and I learnt that Winter Study is set on Isle Royale, I had ample incentive to give her a chance.

It turns out there’s nothing whatsoever Country & Western about Nevada Barr. Winter Study is number fourteen in the Anna Pigeon series, and it’s a mystery, crime-solving story revolving around a wolf study that has been undertaken on the island for 50 winters. The Department of Homeland Security wants the Island open to the public all year around: a typical knee-jerk reaction to the terrorist attacks on the U.S. For the wolf researchers, however, this would basically shut down their operation and put an end to 50 years of valuable data collection.

Strange things are happening with the wolf packs on the island and by the end of the book, three of the seven people on the island are dead; but is it a hybrid wolf doing the killing or one of them? Anna has her suspicions, but nothing she can put her finger on. Bad feelings, and a cabin fever-induced paranoia, aren’t a rational basis for arrest.

Barr describes the isolation; the too-close-for-comfort atmosphere in the bunkhouse; the frigidity of the season; and the harsh, often gruesome, reality of animal survival. Little is left to the imagination. If you don’t have the stomach for animal dissection or some potentially affronting language, I suggest you pass this one over.

Apparently, Barr took her research for this book quite seriously by participating in a winter study on the island. Her personal experience is reflected in passages describing the habitat and routines of the wolf and moose populations, and the precarious relationship between humans, animals and the ice-cold winter.

The reviews for this book are definitely mixed. Some found it to be a disappointing instalment in the series, while others found it to be her best so far. Personally, I found the characters weak, including Park Ranger, Anna Pigeon. It took too long to really get a feel for who was who and who did what, and at times the storyline was unclear. Even re-reading some paragraphs didn’t help make them any more understandable. About a third of the way through it got interesting and the hairs did stand up on the back of my neck at one point, but by the time I eventually reached the end, I felt unsatisfied and actually bored by the whole narrative.