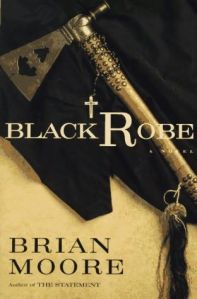 This is a great read. The pace is quick, efficient and a literary treat; especially when compared to some of the non-fiction I read.

The story takes place in the “New World” in the 17th Century. A Jesuit Missionary, named Nicanis by the Algonkian people he is with, is trying to get to a mission where he is meant to replace the current priest. The journey there, however, is wrought with perils. Namely, Iroquois and bad omens.

Dreams are potent advisers to the Algonkian. Dreams tell people of what may come to pass, if the dream is heeded. Two dreams that occur within the story are one of a person being covered in blood and of the Jesuit missionary entering into the mission townsite alone. Both come to pass.

The interplay of spirituality is quite interesting, as the Jesuits and the Algonkians both see the world as one of spirit, but they interpret things differently. To the Algonkians, the world, that is, the plants, the water and the animals are alive and imbued with spirit. The Algonkians accuse the Jesuits (the Normans, actually) of being blind and deaf to the spirit world, which the Algonkians say comes alive at night. To the Jesuit priest, this is not the way he sees it.

A lot of spiritual tension is built up regarding the act of baptism, the role of god, and the afterlife. To the Algonkians, the Jesuits seem to perform their “water sorcery” only to have people die – this makes them fear the Jesuits magical powers. Yet, after a disease (thought by the people of the village the travelers finally get to to have been brought by the black robes themselves) wipes out the village, many people decide to convert. But to the Jesuit, these aren’t the proper circumstances, nor is it the right way, of baptizing a potential convert. To the Black Robe, it is about saving a soul for God’s Heaven, a soul that is ready to accept Jesus as savior. To the Native people, they just want magic to help them hunt and be healthy…in this life.

Along the way, lines of immorality, savagery, faith and honest-to-goodness survival test the mettle of the travelers. Pretty entertaining, and my curiosity about accuracy has me wondering about the eastern area of the Great Lakes from that time period.